The Awe-Inspiring Moments of Research


I miss my genealogy society buddies. We all understand the need to share what we find in our research projects. Some things are just not meant to be experienced alone.

Take yesterday's episode at the National Library of Ireland. I had decided to continue slogging through those unreadable microfilm records from the Catholic Church parishes of County Limerick (for our Flanagans and Malloys) and County Tipperary (for our Tullys and Flannerys). After a late and leisurely breakfast—with three weeks of sleep deprivation catching up to me, believe me, I needed a break—I took the morning to finish up the parish Ballyagran records.

I drowned my disappointment in a small cup of mocha at a noisy coffee shop over an art gallery near Kildare Street, then came back to the library for more drudgery. You may think I am a glutton for punishment, but at this point, I only wanted to say I had finished a microfilm roll.

My final task for the day was to pick up where I had left off on the parish records for Ballina in County Tipperary. Granted, anything I could find there would not add much to what I already knew. Thanks to overzealous relatives of the past few generations who saved everything, I had already unearthed a letter from a parish priest, who several years after the fact had provided written verification of baptism for my husband's great-grandfather. But I still wanted to see it in the original record.

The microfilm I had been working with, as I mentioned to you before, was in horrible shape. Not only were the original records apparently greatly faded, but the film itself was scratched from repeated wear. Then, too, the priest's handwriting had been a particular challenge for my eyes. Not to mention, the film itself was torn, both at the beginning of the reel, and then at the middle, where the strand was broken in half.

Sidestepping all those hazards, I proceeded beyond the place where I had left off the other day. Discovery number one was the relief upon realizing that part of the reading difficulty was due to an ineffective machine—I wanted to cheer on account of the brighter readout, but there seemed to be a no-talking policy in place, so I minded my manners.

I keep rolling past my starting place, watching the dates slip away from my target--marriages moving into the 1860s, then 1870s, much too late for the generation I was seeking. I was sure this would be another empty attempt.

And then, without warning, the next page on the microfilm not only switched abruptly from marriages to baptisms, but skipped from February, 1872, back to March, 1832. The quality of the film changed, as well. While complete pages—admittedly filled with chicken scratch, but at least completely present on the readout—had been the fare for the rest of the film, suddenly the images were of smaller, darker pages with all the edges crumbled, torn or worn away. The left margin, where a date and first name of the baby should have appeared, there was nothing. The paper was gone.

I tried to read through the records anyway. Despite the increasing difficulty in deciphering the names listed, not far from the top of the page, I thought I made out the words, Denis Tully and Margaret "Flannary." Was this our Tully line? Sure enough, the next line provided enough for me to see "--ke tully and Kitty Flannary."

I already had a baptismal note like that—it was for the Ryan family branch of our Tully family, which started with Johanna Tully, our John's older sister. Still, I was overwhelmed with this sudden sense of awe. Even though I was looking at a microfilm of the original document, I had this instant feeling of connection with the past—our family's specific past.

I wanted to tell someone. I looked at the woman sitting next to me. Someone whom I hadn't met, she was engrossed in the struggle of making her way through her own illegible assignment. I looked around the room, but there wasn't even anyone from our own research group with whom to share my small victory. All I could do was sit there, sigh heavily, and consider how incredible it was to have even this small connection with someone who was once part of the family I know now.

Wishing I could memorialize the experience—I know; I was desperate for some way to share it—I grabbed my pencil and wrote the date and time in my notebook. It was 4:23 p.m. on October 16.

Perhaps a sniffle alerted my desk-mate to look up. Glancing at me with an inquiring look, she gave me all the opening I needed, and I told her what I found. We exchanged war stories and complaints about horrid microfilm samples, and then she packed up and called it quits for the day.

I had just a few minutes more to work before closing—just enough time, in fact, to discover one more hint about the other John Tully I keep finding in family records—before staff came in to unceremoniously announce that the library was closing in fifteen minutes and everyone needed to leave. Now.

I didn't get much more done on that microfilm yesterday, but that's okay. I still have today--and even Saturday morning, if necessary. But some things you can't just rush. When you can't find anything, it can be a drag. Our tendency is to hurry past those moments.

But when you find something, you can't just soldier on. Those are the moments when you absolutely need to stop and savor the victory—to let the reality of the realization wash over you. The stark recognition of what these discoveries mean can stop you in your tracks.

These are the moments we are in a hurry to find. But when we find them, all Time seems to stand still. In that timeless moment, what we find is meant to be shared. 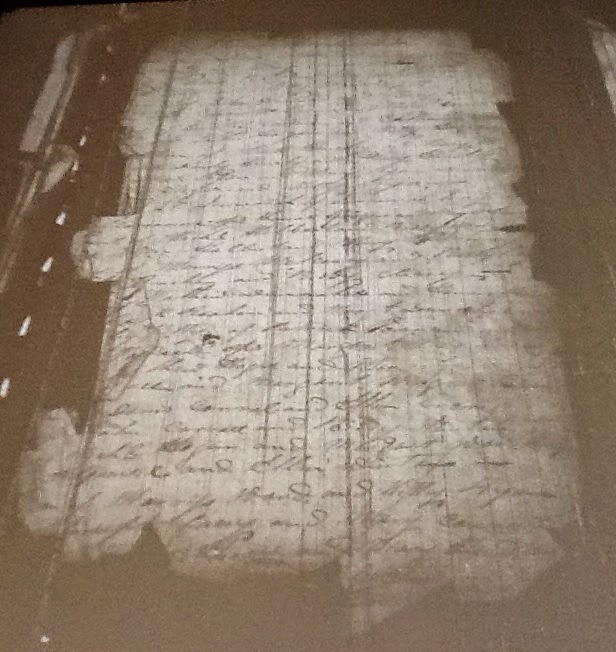 Photograph: The close-up, above, of the 1832 baptism of an unnamed child of Denis and Margaret Flannery Tully of the Catholic parish of Ballina in County Tipperary is followed, below, by the picture of the microfilmed page from which it was extracted.