The Price of Butter in Fort Wayne

The war had been over for just about a year, but Agnes Tully Stevens’ son Frank was still serving his country. Perhaps that is why Theresa Blaising Stevens’ mind turns to him as she runs down the list of questions as to the family’s wellbeing in her June 1946 letter to her daughter-in-law.

Actually, I’m not even sure where Francis X. Stevens was at that point—and he was my father-in-law. I do know that he had been stationed aboard a ship in the Pacific, and if his brother John (actually another John Kelly Stevens, named after his grandfather) had moved his family to California about that time, perhaps that was a logical place for Frank to stop on his way back home. I do know that Frank made it to Chicago before 1949, for that is when a chance visit to his Tully relatives in rural Ohio occasioned the moment he met his bride-to-be—but that is a story for another time. Whether he made it home to Chicago in time for his father’s funeral is something I don’t, at this point, know.
John’s son, Larry, was just about old enough to start school, which is possibly why Theresa was so concerned about where in his new neighborhood he would enroll his son. As for great-grandmother Theresa, the choice was obvious.
I am presuming that both “Patsy” and “Pat” refer to Agnes’ only daughter, Mary Agnes Patricia Stevens—who, incidentally, became the keeper of Agnes’ personal papers up until the time of her own death, to whom I owe much gratitude for being able to access these wisps of family memories.
As far as who Virginia Guttermuth is, I have no idea; probably an acquaintance of Pat—although, considering that Pat didn’t marry until she was over thirty, I’m not sure this comment by Theresa is intended as a dig, or a mere snarky commentary on the ostentatiousness of a mutual acquaintance’s quirks. At any rate, Virginia was nowhere to be found on online resources for historical records. Come to think of it, hearing that Pat had a lawsuit in the works makes me want to research that angle further, too.
The grocery rundown in the second paragraph gives a little insight into postwar living conditions in the Midwest, swirled together with perhaps a little cultural diversity from Theresa’s youth, when the household she belonged to harkened back to a more Old World flavor. Whatever her opinion about “too fresh” bread, I loved the comment about her “margrine” too much to edit the misspelling. 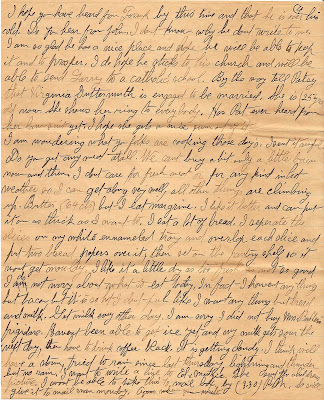 I hope you have heard from Frank by this time and that he is over his cold. Do you hear from John. I don’t know why he don’t write to me. I am so glad he has a nice place and hope he will be able to keep it and prosper. I do hope he sticks to his church and will be able to send Larry to a catholic school. By the way tell Patsy that Virginia Guttermuth is engaged to be married. She is 25 years old now. She shows her ring to everybody. Has Pat ever heard from her lawsuit yet. I hope she gets a nice sum out of it.
I am wondering what you folks are cooking those days. Isn’t it awful. Do you get any meat at all. We can’t buy a bit only a little bacon now and then. I don’t care for fresh meat or for any kind in hot weather so I can get along very well, all other things are climbing up. Butter (64 cts) but I eat margrine. I like it better and can put it on as thick as I want to. I eat a lot of bread. I separate the slices on my white enameled tray and overlap each slice and put two bread papers over it, then set on the pantry shelf so it won’t get mouldy. I like it a little dry as too fresh is not so good. I do not worry about what to eat today. In fact—I haven’t anything but bacon, but it is so hot I don’t feel like I want any thing but bread and milk. Get milk every other day. I am sorry I did not buy Mrs. Batter’s frigidare. Haven’t been able to get ice yet, and my milk gets sour the next day, then have to drink coffee black. It is getting cloudy. I think will have a storm, tried to rain since last Thursday, lightning and thunder but no rain. I want to write a line to Ed x Mutzie. She sent the children’s picture. I won’t be able to take this to mail box by (3.30) p.m. So will give it to mail man Monday. Agnes when you write
And that is the end of the letter. In her characteristic way, Theresa runs her ink to the edge of the paper—no pristine margins, here—and stops only when she runs out of room. Her last words, struck out, seem to indicate a fifth page would follow. There were two more pages, which I’ll share with you in subsequent posts, but these were oddly cut, though of the same paper, and not in the same vein as the body of the letter. I have no way to know whether any specific segments were removed before the letter was saved. But with no sign-off, and such an abrupt end, it seems there should be more.
© Copyright 2011 – 2020 by Jacqi Stevens at 2:57:00 AM