What do you do when your need to research family history takes you to new locations—and even new languages? That's when I keep three tools close at hand at all times: Google Maps and Google Translate, plus Wikipedia.

While these tools may seem the most basic of services, when research leads us into unknown territory, I find myself constantly checking these tools with one question in mind: "Is that true?"

Take this Krzewinski family I'm following from Pomerania in northern Poland to the American city of Milwaukee in Wisconsin. When taking a multi-generational view—from baptisms to marriages to deaths, and then all over again—it seems the family jumps from one location to another. Concerned that I'm still following the right family, I've learned to check distances from one documented residence to another.

Take this one Krzewinska sister, Marianna—the one who, in Milwaukee, was sometimes recorded as  Marie. To make sure I was following the right person, I traced her from her baptism to her marriage and the birth of her first children in Poland until she arrived in the United States. Transcriptions of those records at the Pomeranian Genealogical Association's website showed Marianna marrying a man by the name of Stefan Czaplewski in Czarnylas—the same location as so many of the DNA matches who align with the family of my second great grandmother.

No surprise there, but when I go looking for baptisms for their children, the only ones I can find are located in a place called Piaseczno. Where on earth is that? Of course, I have no idea, so I head to Google Maps, which brings me to a location south of Warsaw.

If you are as uninformed about Polish geography as I am, you can see the utility of this tool. At first, it caused me to think perhaps I had, amazingly, found another couple with precisely the same names during that exact time period. But looking more carefully, Google Maps pointed me to a second option, a location listed as Piaseczno k Gniewa.

And what might Piaseczno k Gniewa actually mean? That's where the second handy tool at my fingertips comes in. Checking with Google Translate, I  quickly see that Polish phrase means "Piaseczno near Gniew." Google Maps tells me that location is only a half hour drive from Czarnylas, so much more reasonable to assume I've got the right couple than if they really had lived four hours away past Warsaw.

It was tools like these which I used to muddle through the puzzle about Stefan Czaplewski's supposed mother-in-law. In trying to determine whether American Marie was the same person as Polish Marianna, some trees on Ancestry gave her mother's maiden name as Julianna Wesotowska. This, of course, causes me trouble, because the only DNA connection I can see to the descendants of "Marie" would be through the mother I had found listed for Marianna Krzewinska. Remember, my theory is that Marianna's mother was sister to my second great-grandmother, so I really needed to find out who this Julianna Wesotowska was.

This is where we cue the entry of an admittedly jealousy-inducing document. As proof of that mother's maiden name, some Ancestry subscribers had posted this record from the collection, "Eastern Prussian Provinces, Germany, Selected Civil Vitals 1874-1945."

Just taking a look at this excerpt from the register below, we can immediately see one depressing detail: it's in a language I don't speak. 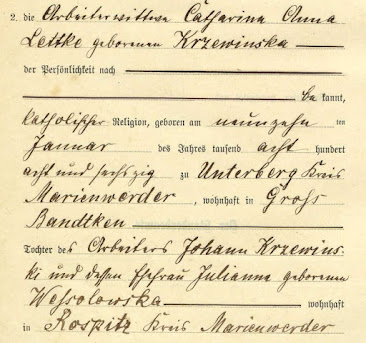 Not only is it in German, but we'd have to decipher handwritten German, as well—not a task I have any appetite to devour at the moment. Still, with Google Translate, plus a cameo appearance by Google Maps, I could determine a few pertinent clues.

For one thing, the location mentioned Marienwerder, which was a historic region in West Prussia. Included in that region were many cities which, in historic maps, were labeled with their German names. Not to make things any easier for us, those German city names are not what those places are called today. For instance, a sample map of the region clearly shows a port city of Danzig—a place we now call Gdansk. This is the same difficulty I first encountered when I discovered my father's "Aunt Rose" declared she was born in "Schwarzwald"—the German name for Czarnylas.

The capital city of that Marienwerder region, just to keep it easy, was also known as Marienwerder—but only back then, to the Germans. Now, the Polish call it Kwidzyn. How close might that be to Czarnylas? About a forty five minute drive in our current times, according to Google Maps. So—maybe this document has something to it.

But of the other details for which I could ferret out details (thanks to Google Translate), I also noticed what appears to be a date some time in the early 1900s, not the 1800s. It also seems to be a document regarding someone named Catharina Lettke, born Krzewinska. It was apparently she who was the daughter of a Krzewinski man whose middle name—possibly—was Johann, and whose mother was this mystery Julianna "Wessolowska." Oh, if only the entire document had been printed, rather than the key points written in.

Could this Catharina have been a sister of the Marianna we know immigrated to Wisconsin? If so, unless they were half-sisters, we have contradicting information on the name of Johann's wife. Yet, given the distance between the town where I found Marianna's marriage record and that of this German document, we could be talking about two separate identities. Of course, questions yet to be asked involve whether the city where the records were kept would always be one and the same as the city where the reporting parties actually lived. Then, too, if the Germans called their place names by entirely different terms, could they also have "Germanized" Polish surnames, as well?

Clearly, it would be helpful to obtain a reliable translation of this entire document, just in case. I may find myself chasing after another rabbit trail to see just who this Catharina Lettke was, and whether her family led back to the Krzewinskis I have been researching. But I also need to maintain my focus on one research question in particular: if Anna Woitas was in the picture in this DNA match's ancestral line, how did she relate to my line's Marianna Woitas?

© Copyright 2011 – 2022 by Jacqi Stevens at 2:48:00 AM
Email ThisBlogThis!Share to TwitterShare to FacebookShare to Pinterest
Labels: Krzewinski, Poland, Pomerania, Wisconsin, Wojtaś