It wouldn't be possible—if you know me, you will realize this—for me to wind my way through such a rabbit-trail-laced research project as this saga of the Zegarska sisters, and not stumble across at least one beguiling detail. The one I want to talk about today, as our story winds to a close, is a powerful reminder that if you wish to find a family history story, you must always—and I repeat, always—look at every document you find about those ancestors.

Let's rewind to the beginning of this saga. It was the appearance of one single DNA match, then a few more, then several from multiple family lines, which pointed me to the possibility that my mystery grandfather's mother—a woman whose name I was told had been Anna Zegars—might actually have been born Anastasia Zegarska.

I've spent the better part of a year—and an especially focused month—of intense research both in American and Polish databases to compile what appears to be a reasonable argument concerning that identity. The last of those DNA matches, however, led me to a different line in this same family constellation: not to the descendants of one of the Zegarskis, but directly to what may have been their mother's sister (or at least a cousin).

As I do with all my DNA matches, I fill in the branches of the family tree with all collateral lines. Working on the descendants of this Anna Wojtaś linked to that last DNA match, I finally came to the youngest of her children, one of the three Krzewinski brothers who emigrated from Poland to America. Andrew—or Andrzej, the name he left behind when he left his home in Czarnylas—was only nineteen when he arrived in Milwaukee, and he waited another ten years before marrying another Polish immigrant, Monika.

What I hadn't mentioned, while writing about those three Krzewinski brothers, was that Andrew's story of married life had its own pathos. Yet, I wouldn't have spotted it, if I hadn't opened up a file at Ancestry.com and actually looked at all the details it contained.

Thanks to those ubiquitous "shaky leaf" hints at Ancestry, I found—and opened up—a document which was supposed to show the death record for Andrew's wife, Monika. One glance at the heading, though, and I realized it wasn't just something about Monika. The header said, "Certificate of Death," sure enough, but the line after "full name of deceased" wasn't Monika. It read, "Child of Andrew Kzenski."

Perhaps genealogists are a heartless lot. When I realized what I was seeing—besides wondering if that were just a misspelling of Andrew's surname rather than a document for the wrong family—I scrolled down the readout only to see what the child's name might have been, and whether I had already accounted for that child in the family group record. It wasn't until I reached the bottom of the page that I was able to recoup my humanity.

It was an unnamed daughter for whom the document had been drawn up. She was born—and died—on April 20, 1902. The primary cause of death was listed as "death of mother before delivery."

That, of course, interjected yet another question as my eyes silently scanned the rest of the page: what had happened to the mother? Almost as if to answer my unspoken question, and yet in a way, not answer it at all, line #25 inquired, "Other important facts not above stated," and the response followed: "one of triplets."

The scenario painted—a frantic attempt in the Milwaukee household at 746 Second Avenue to save at least the newborn children, if not their mother—was sadly broadcasted not only in the local newspaper, but picked up by wire services and reprinted in newspapers across Wisconsin, throughout neighboring states, and even as far away as Arkansas and Mississippi. The three children were buried with their twenty five year old mother in a single grave at Saint Adalbert's Cemetery a few days later.

While it was only a matter of a few lines in a document, the story hidden between those lines would most certainly have been lost to me, but for one well-entrenched research habit: always, always, always read the document.

Don't just accept a website's offer of a "hint" and blindly plug it into your database. Make the commitment to inspect the whole document, not just the "punch line" of names, dates, and locations. Include all the other lines of the document—lines which most certainly would not have been included in the typical indexing project at genealogical websites. If there's ever a story to tell about your ancestors, that's where you are most likely to uncover the opening lines. 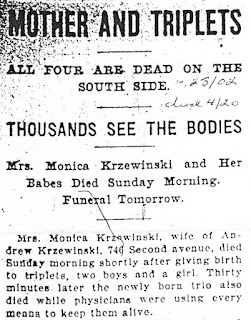 © Copyright 2011 – 2022 by Jacqi Stevens at 2:52:00 AM
Email ThisBlogThis!Share to TwitterShare to FacebookShare to Pinterest
Labels: Documentation, Krzewinski, Newspaper Clippings, Reading Between the Lines, Wojtaś