Theories always seem to wrap puzzles nicely in a box. When a perfect fit, they provide the precise alibi to trick us into accepting as true what might turn out, upon closer inspection, to be a flawed conclusion.

Take my struggles with figuring out the origin of my paternal grandfather's family. Discovering his undocumented name change, sometime after his arrival in New York from his native Poland, it only very slowly led to concluding—once again, without a paper trail—that his mother, listed on paper as Anna Krauss, was more likely a woman by the maiden name of Zegarska.

How do I know this? Only a theory. Yes, it is based on the fact that I now have several DNA matches which point to that Zegarski surname from a small town called Czarnylas in the northern Polish region of Pomerania.

Confounding that tempting theory is the fact that one line of descent from that Zegarski origin was linked to another woman known as Anna Zegarska. If that Anna Zegarska was sister to my Anna, something is obviously wrong with that theory. Could the Anna Zegarska, born in 1859 in Czarnylas, who married Tomasz Gracz and then moved to Milwaukee have had a sister whose full name was shortened to a nickname Anna? There were, after all, three other sisters whose names could lend themselves to such a theory.

One of them, Susanna, was baptised only two years previous to her sister Anna. With that in mind, though, unlike her sisters, Susanna would have married at a younger age: only eighteen at the time of her 1875 marriage to Mathias Machlus, rather than the typical twenty one.

Could that have been the right Susanna? There was no trace of any Machlus baptismal records in Czarnylas listing a mother with a maiden name of Zegarska.

There was an answer to that short-lived dilemma, though: soon after, the bride and groom moved closer to the port city of Gdańsk, where they, too, raised a large family of at least fourteen children before Susanna left off childbearing in 1899—or, as I rather suspect, the record set's transcriptions ended. 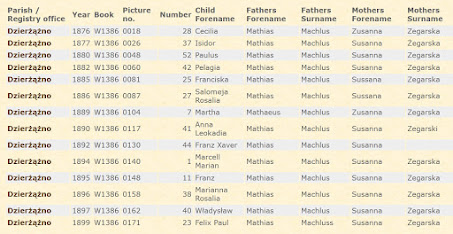 It is unlikely that, given how well-established the Machlus family became in over twenty years of residence in their adopted hometown of Dzierżążno, Susanna and Mathias would have then chosen to remove to America. Indeed, checking my DNA matches at Ancestry, there were none having the Machlus surname in their direct line. Susanna would not have been my Anna in New York.

Susanna's sister Marianna might also have been an alternate Anna. She, however, married a man by the name of Franz Krocz and, like her sister Susanna, moved from her native Czarnylas to nearby Bobowo, and then in the opposite direction to Skórcz. How do I know that? By following the baptismal records of her many children from 1865 through 1888. Again, an unlikely candidate to follow that with an immigrant journey across half a continent and an ocean. Marianna is not going to be my Anna in New York, either.

The remaining possibility for Anna among the three Zegarska sisters could only be Anastasia—and not just because of the similar name, but also because her husband's surname was so close to the Puchalski originally claimed by my paternal grandfather. Then, of course, there were those baptismal records linking Anastasia and her two children to my Anna in New York and her two children of the same given names, which also helped.

Despite all those other Annas—except one—remaining in Poland, there was at least one other Zegarska relative who eventually moved to Milwaukee. That I also know, thanks to only one reason: the DNA matches left in this Zegarska's trail. But for that particular woman, we'll need first to take another step backwards to understand how she connects to the bigger family picture.