May the "Schwartz" be With You


In seeking to discover any information on my paternal grandfather's origin, we need to keep going back to that mysterious woman named Rose, supposedly my grandfather Theodore J. Puchalski's sister. Today is one of those days.

I've been agonizing over Aunt Rose for years, ever since I learned that there was such a woman. I've written about my search for Aunt Rose on this blog over four years ago, and have kept up the chase ever since. You know how it goes: sometimes, the search seems to rocket on into new territory; other times, it languishes.

At one point, I had found one of those serendipitous discoveries which, though it shouldn't have been there, remained long enough to grant me the clue I so desperately needed. Such was the case with the other side of my father's family in my paternal grandmother's roots, as divulged in a census enumerator's error in 1920, when I learned that the Laskowski family originated in the region of occupied Poland once called Posen by their German rulers.

The same thing, thankfully, also happened in the case of this Aunt Rose and her husband George Kober. Whoever the enumerator was for that neighborhood of New York City, she made the mistake of writing exactly what the reporting party said about Rose's place of birth. Instead of writing what would have then been the politically-correct answer of Germany, she entered the word, "Schwartzwald."

As you can see from this excerpt provided from Ancestry.com, the middle line—that was the entry for Rose—had the original entry "Schwartzwald" lined out and replaced by the letters "Ger" for Germany.

I couldn't have been more grateful for a mistake made. I copied that word "Schwartzwald" into my search engine to see what I could find. Of course, I found the predictable, with the spelling adjustment of Schwarzwald. Schwarz, of course, being German for black, immediately led me to the fabled region we know in English as the Black Forest.

While it was exciting to think that my ancestors might have hailed from such a picturesque land, once I sat down and thought this whole thing out, I realized it produced some conflicting information. Schwarzwald couldn't have been farther away from the place in Poland I have recently been researching, based on these new DNA match discoveries. When I had tried to make any progress with this discovery back in 2015, it is no surprise to see the search was cut short in its tracks. Complicating that was the subsequent discovery of Rose's mother's unexpected surname of Kusharvska—not a very German-sounding surname. With all those conflicting details, I had no choice but to put this puzzle on a back burner. I was stymied by what appeared to be unresolved leads heading in opposite directions.

Now that I'm mulling over these new DNA connections which lead me to a Michalski family with roots in the historic region of Pomerania, I'm addressing this question about Aunt Rose again from every angle. I'm studying local history, trying to build timelines which might reveal reasons why a family might leave their homeland for a new start so far away. I'm studying geography, seeking any hints that might align with these hopelessly enigmatic story lines—at least, the few hints my grandfather reluctantly divulged. Any possible clue, any weakest of hints: I'm following them.

And so, poking around that newly-found online resource for transcribed Pomeranian records, I exhausted every search angle I could think of—and noticed something. It seemed the parish location with the most records fitting the parameters of the Zegarska maiden name which connected with those Michalski DNA matches was for a place called Czarnylas. Where on earth would a place with a name like that have been located? A name I had never heard of before, I had to look it up.

I found some very interesting details on this new-to-me town. For one thing, it was small: a village of less than five hundred people. In current-day Poland, it is located in the Pomeranian Voivodeship. Its provincial capital is a city called Gdańsk, a port on the Baltic Sea. Perhaps those story my grandfather told of being an orphan put to work on a sailing vessel may have had a reasonable basis, after all.

Every time I am confronted with a new term or topic in my genealogical journey, I head first for Google, and ultimately to a generic source of information like Wikipedia. In this case, Wikipedia granted me an unexpected gift in its very abbreviated entry on the village of Czarnylas. At the very top of the page, after the name of the place and a pronunciation guide, was an entry informing the reader that this Polish place had also gone by a different name during the years of German occupation. That name—makes me cry to see it—was Schwarzwald.

Why the Germans would name two different places on entirely opposite sides of their country by the same name, I have no idea. I certainly would otherwise have had no way of knowing this fact. If it weren't for DNA testing, I never would have started looking at trees of people claiming the surname Michalski in their heritage. If it weren't for spotting a wife's maiden name of Zegarska in one of those Michalski trees, I might not have looked up this new-to-me Pomeranian website, nor spotted the name of the parish where the most promising entries led me. I certainly would have had no reason to look up any further information on such a tiny place as Czarnylas, if the path hadn't led me in that direction. But step by step, ignoring no clue, our research can coax us along into predicaments where we have no choice but to ask—and then answer—our own questions. 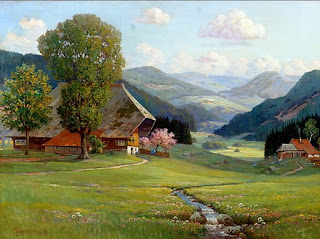 Above: Not the right Schwarzwald: Arnold Lyongrün's 1912 painting "Spring in Black Forest" depicts the scenery in the more widely known Schwarzwald, not my apparent ancestral village in Pomerania; image courtesy Wikipedia; in the public domain.
© Copyright 2011 – 2022 by Jacqi Stevens at 2:49:00 AM
Email ThisBlogThis!Share to TwitterShare to FacebookShare to Pinterest
Labels: DNA Testing, Laskowski, Michalski, Poland, Puchalski/Puhalski, Zegarski