There's nothing to restore normalcy, after a tumultuous episode, quite as effectively as just getting back to the old routine. As it just so happened, while I was hissing and moaning about the woe-is-me blow-up last week, I had not one but at least three contacts who replied to my ages-old inquiries. While one was a likely distant cousin wanting to compare research notes, two others were from strangers—well, fellow genealogy fanatics whom I haven't yet met—who replied to my messages inquiring whether an antique photo I rescued might be of interest to their family.

I'll take my cue from one reader who kindly nudged me with the tempting proposition to explore whether his family's Mr. and Mrs. Albert Roberts might be one and the same as my mystery Mr. and Mrs. Albert Roberts. Now that I'm done—hopefully—with sulking and pouting, I'm following up with his suggestion to check out the photo his family found. Maybe this is the right couple...and maybe it isn't. Hopefully, you will get a chance to weigh in on that verdict this coming week.

The other contact was someone related to another photo I had found in an antique store up in Sonora, California. I had contacted this researcher via the Ancestry.com messaging system back during the winter holidays. That being such a busy time of year, I wasn't surprised when I didn't receive any reply to my (admittedly odd) request. But when I got no answer in January, then February, then March, well, I figured that was a bum lead. Not so, judging by a message I received just this weekend. Now I have another story to go back and review, in the process of answering this new message.

There are other photographs I had purchased from that Sonora antique shop—photos yet to be shared with you on A Family Tapestry—but between preparations for my southern research course at SLIG and then my research trip to Florida, there just wasn't any place to insert posts on mystery photos. No matter how fun it is to help these abandoned photos find their way back home to family, I had some other stories to tell. Maybe at this point, while I'm catching my breath and re-establishing my genealogical and organizational equilibrium, following up on these timely messages would be just the thing.

We'll revisit the story of Mr. and Mrs. Albert Roberts from Iowa, tomorrow. 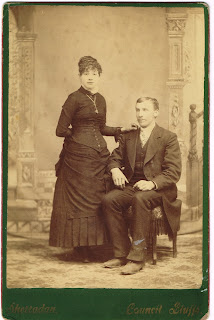