"Visit Us Before Closing"


Resources to help researchers access the many names and details from operations of the Freedmen's Bureau may be a welcome aid, but I wasn't perusing this overview for merely academic reasons; I want to find out what became of King Stockton's parents—both King Stockton senior and Hester McClellan. As far as I could tell from the junior King Stockton's biography, his father had been left in Georgia, long before the Civil War. But even Hester—whom we could trace from the Tison plantation in Glynn County, Georgia, to the McClellan property in Suwannee County, Florida, and for whom her son had confirmed her surname taken was McClellan—had seemed to disappear after the war.

What does an online researcher do when offered a box to fill in with a name and the invitation to click here? I took that Freedmen's Bureau record set out for a test drive, of course.

Sadly, the records already available on the discoverfreedmen.org website did not lead me to any results for the name King Stockton. Nor could I find anything for Hester. But I did come up with a result for McClellan in Florida.

Lest you think it was a lead to help resolve the question of what became of our Hester, think again. Remember, the Freedmen's Bureau originally was set up to handle a variety of post-Civil War issues. Among them was the provision of education for former slaves for whom the basic skills of reading and writing—to say nothing of higher education—had been denied. And in the north Florida county of Jefferson—two counties to the west of Suwannee County, the place of King Stockton's lifelong servitude at the McClellan plantation—this website served up four documents which included the surname McClellan.

The records all were associated with a school in Jefferson County called Vaclause. Apparently, for each month of operation, the head of the school—in this case, often the lone teacher remaining to continue teaching the students—was required by the state superintendent of schools to complete the "Teacher's Monthly School Report."

The one-page questionnaire included several routine questions one would expect of such a bureaucracy. Total enrollment for the month. Enrollment for the previous month. Number of advanced readers, compared to number who can only handle "easy lessons."

There were, however, several questions which revealed the time frame of the report. Items like "number of white students" or "number free before the war" combined with requests to specify whether the school was "supported wholly by the Freedmen."

I found three such reports in the Discover Freedmen website filed for this school in Jefferson County. All came up as search results for the keyword McClellan. But there was nothing mentioned anywhere in the records for Hester McClellan, the name we had learned was King Stockton's mother's name. 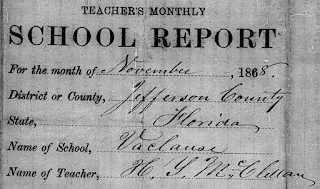 Now, you have to realize that the focus of my research since last summer has been on the extended McClellan family. Not only because I am trying to verify just how I connect with other DNA matches, but also because I wanted to do a specific project for my class in southern research techniques at last January's Salt Lake Institute of Genealogy, I have been in the process of mapping out each descendant's line from the couple, Charles and Elizabeth McClellan of South Carolina—the Florida territory settlers who were the parents of my George Edmund McClellan.

So when I saw that name listed in those school reports—H. Y. McClellan—I thought that looked like a familiar moniker. Checking my McClellan tree, sure enough, there he was: Henry Young McClellan, son of Charles and Elizabeth and thus a brother to my George Edmund McClellan. This Henry Y. McClellan was a resident of Jefferson County, Florida, from at least the 1840 census onward. And double checking the 1870 census, the closest government record to the date of his completion of those school reports, he did give his occupation as school teacher.

Apparently, his was the writing and the signature on the reports. Reading between the lines made for some speculations as to how tenuous his position as teacher there might have been. Questions like "State the public sentiment toward Colored Schools" makes me wonder whether people in his position faced any public or political backlash for serving in that capacity. (His answer: "As far as I can learn, it is favorable.")

A plaintive request wrapping up Henry McClellan's report for November of 1868 makes me wonder about the future of the school. Indeed, not only funding for the school itself, but for the Freedmen's Bureau in general, was in jeopardy with political pressures from southern representatives in Congress. Teacher McClellan's comment and request and the close of his November 1868 report:


I find the children studious and easily controled [sic] and to learn well and would like you to visit us before closing.


Whether H. Y. McClellan was granted his request on behalf of his thirty students, I can't tell. By his own report, the school was not supported by any "Educational Society" nor the local school board, but derived its support entirely from contributions by the Freedmen's Bureau. By the very next year, the Bureau had lost most of its funding, and by 1872, Congress failed to renew the required authorizing legislation, essentially putting the Bureau on the chopping block.

I wish there were some way to search further for the history of the school, especially to determine whether other sources of funding were secured, but with so many variations of the spelling of the school name itself, my quest has so far yielded me no results at all. But for that one moment, the surprise of realizing my one search hit actually yielded a name from my family I was familiar with gave me that rare feeling of the micro of my family history connecting with the macro of our nation's story.

Above: Sections of the teacher's report sent by Henry Young McClellan, both cover page and comment at the end of the report, are courtesy FamilySearch.org via search at discoverfreedmen.org.
© Copyright 2011 – 2022 by Jacqi Stevens at 2:52:00 AM
Email ThisBlogThis!Share to TwitterShare to FacebookShare to Pinterest
Labels: Florida, Georgia, McClellan, Online Resources, Stockton