The Reliability of Oral History


Any family history researcher who has heard that his or her family descended from a Cherokee princess understands the risks of relying on oral history. On the other hand, the less outrageous of oral history reports—the "there were three brothers" story openers come to mind here—sometimes beguile us into believing their seemingly reasonable claims.

But what if all a family has is an oral history? After all, there are some cultures which preserve their history through oral tradition. What then? And, as a hybrid example, what about those cultures—say, the seventeenth century Irish Catholics forbidden to learn how to read—which at one time were not able to use a written format for their history?

There probably are a lot of us, in researching our genealogy, who discover that our family story is contained, in part, in an oral history. I don't know how you feel about such a discovery, but my first reaction is to shy away from accepting it. Doubting Thomas that I am, I want first to research it—to find the documentation to bolster the claims passed down through the generations.

Keeping that in mind, you can understand how reticent I am to admit to having some of those oral histories. One, thankfully, was borne out already—but only after decades of letting the story lie, closed up in the back of my mind. I didn't really know how to pursue proving that an unnamed slave on a family plantation eventually had his life story published in book form—even if a copy of that book was supposedly given to my relatives.

But now I know even the most unsearchable stories can indeed be tracked down and documentation located. The key, it seems, came through the very thing we are so reticent to do: admit that we have oral stories, and be brave enough to put them out there.

So, here is the oral story I learned from my mother's cousin, the gracious lady who escorted me through the family properties in Wellborn during my visit to Florida last month. According to this cousin, King Stockton's mother was a beloved personal assistant to my third great grandmother.

Beloved? One could hardly use such a word to describe the condition of an enslaved person. The dissonance jars me, deep inside, knowing the abuses of the institution of slavery as it was practiced in this country. And no one actually used that word in describing this situation. Here, though, was a token of what I mean. According to the oral history, this personal assistant, a slave called Hester—whom we later learned was mother of King Stockton—was not only valued in life, but before Sidney McClellan died, she requested that when her slave also died, she be buried at Sidney's feet.

While "at her feet" may sound demeaning, consider one detail of life in early 1860s southern culture: whites were buried in "white" cemeteries, and blacks were not. Segregation was brought down to the tiniest aspect of daily life.

In response to Sidney's dying request, her family protested that that simply wasn't done. There would be an outcry among those living in their small town—or perhaps worse.

I don't know if Sidney's request was ever granted. At this point, I don't even know when Hester—who later took on the surname McClellan, herself—died, or where she was actually buried. I do know, though, that almost a century later, a plaque was inscribed and posted at the gate to the McClellan cemetery, stating something to the effect of "this is to honor the several slaves who were buried here."

Telling, in retrospect, was discovering that, even in our times, that plaque was removed—somehow, it "disappeared"—and no further word was spoken of that possibility. Except for this oral history.

And yet, next to Sidney McClellan's marked grave, there is an unmarked space wide enough for another burial. Was anyone buried there? Could it have been Hester? 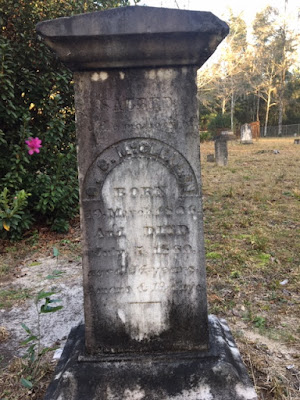