If the history of the former McClellan slave Hester and her son, King Stockton, is tied to the story of her early adulthood, to pursue that story means we must abandon the George McClellan plantation in Wellborn, Florida, and remove ourselves to the Tison plantation in coastal Georgia. The King Stockton biography mentioned that his mother came to Wellborn, Florida, from Glynn County, Georgia, along with the infant King.

The location specified in the King Stockton biography was the property of a man called Job Tison. He, however, was long dead before King Stockton was even born, further fueling the idea that the reason both King and the enslaved Hester were listed in the probate records for George McClellan's wife was that she had, as we suspected, inherited them from her father's estate. Let's take a look at what we can find of those records.

First, though both George McClellan and his parents, Charles and Elizabeth McClellan, originated in South Carolina, they were all likely residents of northern Florida by 1830. Charles and Elizabeth can be accounted for in the 1830 census in Hamilton County, just to the west of Columbia County and north of where George later settled in what was to become Suwannee County.

Though the connection between the McClellan family and that of Job Tison in Georgia certainly needs to be explored further, apparently the McClellans had first settled, after leaving South Carolina, in Camden County, Georgia. Though not clear from the 1820 census record—the surname appears as "McLenon" rather than McClellan—this may be the entry for our McClellans. Though the surname was not exactly correct, Charles was listed just below an Andrew, who likely would be his brother, if that McLenon was simply a mistaken, similar-sounding surname entry.

Charles McClellan, it turns out, may not only have been a resident of neighboring Camden County, but even a close acquaintance of Job Tison. Thanks to a cooperative effort with another King Stockton researcher who has shared with me the link to an online transcription of Job Tison's will, we can see his final testament was drawn up in the presence of a man by the name Charles McClellan.

In that Tison will, drawn up on February 3, 1824, Job made various stipulations, perhaps since several of his children were still minors. However, one thing was clear: the woman known as Hester was gifted by Job to his daughter Sidnah.

Job Tison died not much later—some records state the date as February 5—and by September 6 of that same year, his wife, also named Sidnah, was appointed executrix of the Tison estate. 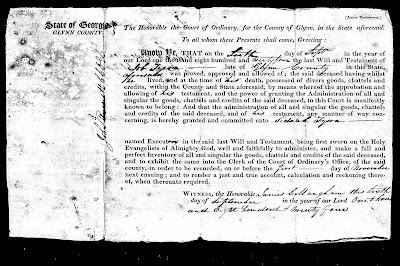 In a move not unlike the one we witnessed after daughter Sidney's death, when her husband promptly remarried, mother Sidnah before her had done the same, marrying a man by the name of Michael Peck on October 29, 1825.

Meanwhile, the Tison estate was still in probate, and several of the Tison children were still underage. By September 25, 1830, though, the twenty-four year old Sidney Tison—"Isabelle Sidnah," according to a transcription of Glynn County marriage records—was married to George Edmund "McClelland" and presumably took with her to Florida her inheritance from her deceased father.

Above: Excerpt from the 1820 census showing the "McLennon" entries, and the 1824 appointment of Sidnah Tison as executrix of her husband's estate, courtesy Ancestry.com.
© Copyright 2011 – 2022 by Jacqi Stevens at 2:55:00 AM
Email ThisBlogThis!Share to TwitterShare to FacebookShare to Pinterest
Labels: Florida, Georgia, McClellan, Slavery, Stockton, Tyson, Wills and Probate