It is here, in the midst of our search for the former slave of my third great-grandfather, George E. McClellan, who, once freed, eventually wrote the story of his life, that the process starts to bog down. A search like this—for a person for whom we don't so much as know his name—can become tedious. But I'm up for it, considering the pay-off: I want to find that book.

The first step is to consider all the possibilities. The story, as it was told to me by my mother, led me to believe this slave boy was about the same age as my third great-grandfather George's son William, for it was William's childhood association with this person which became the connection between them after the Civil War. Since William Henry McClellan was born in 1845, that would infer the approximate birth year for our unknown author.

My first step was to look at the slave schedules in both the 1850 and 1860 census records. That would mean looking for a male who was approximately five years of age in 1850, and fifteen years of age in 1860, listed under the name of George McClellan at his home in Wellborn, Florida.

Looking first at the 1850 schedule, I can already see I'm going to have problems ascertaining which of the possibilities would be the person I'm seeking. 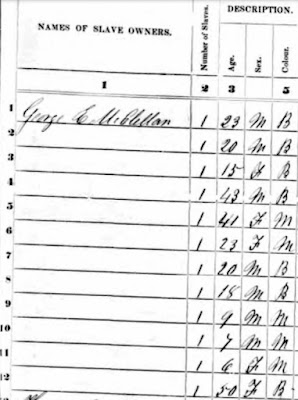 On the second page of the McClellan holdings, it is easy to see there were no five year old boys listed. The closest I could find was a seven year old and a nine year old. The next closest in age was an eighteen year old, certainly much older than my second great-grandfather William would have been at the time. Could it be that this slave child wasn't really a part of the household until after that enumeration?

Looking at the 1860 census didn't help. While there were many more listings, there weren't any clear directions here, either.

This is just an excerpt of the first page of the 1860 listing for George McClellan, William's father, beginning from the first person remotely within a possible age range. (The listing was arranged mostly in age order; the ascending numbers in the far-left column merely counted the amount of entries, while the second column represented each person's age.) There was, however, one sixteen year old and one fourteen year old who could have been fifteen-year-old William's companion.

The challenge in using these schedules is that they rendered each enslaved person as a non-entity; no names were given. Until we can locate any other type of record which would include that vital information, our next option is to hope that those two teens—the fourteen year old and the sixteen year old—remained in the vicinity of Wellborn after receiving their freedom at the conclusion of the Civil War.

By the time of the next census in 1870, the one place marker which could help us orient ourselves as to the right neighborhood in which to locate those former enslaved people would be gone: George McClellan died in 1866. Hopefully, his son William remained on the same property for the 1870 census. If that does not turn out to be the case, tracing the surnames of George's former neighbors might help orient ourselves to the right property location.

Regardless of which way we find the listing, the goal is to see whether there were any former slave families still living in the neighborhood by the time of the 1870 census. Hopefully, the names of these families will lead us to that unidentified former slave whose life story was passed in book form—or possibly still as a manuscript—to my grandmother.