Finding a Friend at Find a Grave


It is never easy to foretell how complicated the path will be from rescued photograph to reunion with family members. Having a name and a location may seem to be the golden ticket, but as we've seen with Mr. and Mrs. Albert Roberts of Council Bluffs, Iowa, it hasn't helped much so far.

While digitized documents, easily accessible online from virtually everywhere, make the search infinitely easier than it ever has been in the past, there is only so much you can do, in the case of dual candidates for the same name. That's why, now that I've checked all the census records, vital records, and newspaper entries, it's time to move on to less typical resources.

One resource I've found helpful is to trawl through all the posted family trees I can find online. I look for direct descendants, of course, but I also keep an eye out for more photographs of the ancestors I'm seeking.

One such photo I ran across wasn't on Ancestry, though. I found it on Find A Grave. It was a photo of Mr. and Mrs. Charles Edwin Parkison. While it is unlikely that you've followed the minutiae on another person's family tree closely enough to recognize that Parkison name—actually, two Roberts descendants married someone by that surname—this particular Mrs. Parkison was the former Ruby Viola Roberts, also known as Ola.

Looking at the photo of Albert and Alice Roberts' daughter Ola, I wasn't sure she resembled either of the people in the photograph I had found, out here in northern California. But just in case I was mistaken in that first assessment, I decided to write the Find A Grave volunteer who had posted the portrait. My main reason for contacting her was to see if she had any other photographs—a picture of Ola's parents would be just what would do the trick—but I also asked her for permission to post the photograph of Ola and her husband here. That way, you can see what you think for yourself, so take a look below.

Of the few Find A Grave volunteers I've contacted, there has always been a prompt reply. Reaching out to connect with fellow researchers at Ancestry.com has not been quite as productive. Still, there are time—many times—when I need to connect with a direct descendant of the subjects of the photos I've found. All I can do is reach out and hope.

There is, for instance, a photo posted on Ancestry of what might be the father of the second candidate for our Albert Roberts. But since I haven't heard back from the researcher who originally posted the picture, I haven't received permission to post it here. You can, however, take a look at the original site, if you are a member of Ancestry.com. See if this picture resembles our Albert Roberts enough to peg him as Albert Marion Roberts, son of James Roberts.

Of course, I prefer any researcher who actually answers messages. This puts me in the odd position of hoping that the identity of the photo I found of Albert Roberts turns out to be the oldest of the three Alberts we've discussed so far. But I can't just conduct a thorough search based on such likeability factors. It's likely this search will find itself grinding on in the genealogical equivalent of sausage-making. And you know what I've said about that...

This Albert Roberts, whoever he is, will likely have to wait until those interminable behind-the-scenes searches finally draw to a conclusive end. Moving beyond any Roberts identities, as for what we'll be discussing next week, I have some travels planned. 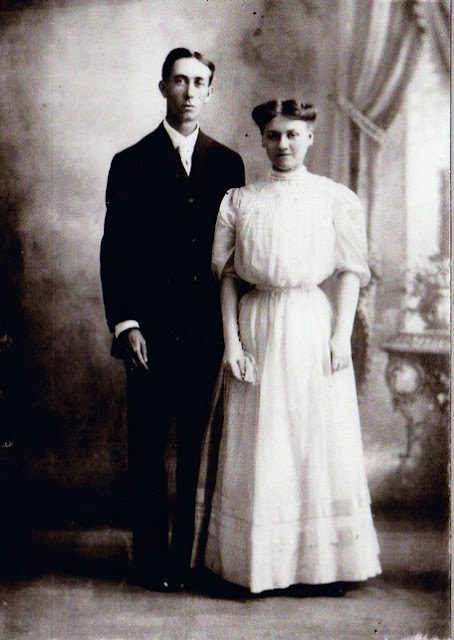 Above: Photograph of Albert and Alice (Dooley) Roberts' daughter Ruby Viola Roberts and her husband, Charles Edwin Parkison of Riverton, Fremont County, Iowa; used by permission of Find a Grave volunteer and second great-granddaughter of Alice Roberts' brother, George Dooley. His family photo, also shared with us thanks to this same volunteer, is posted below, with Ola's Uncle George seated on right. 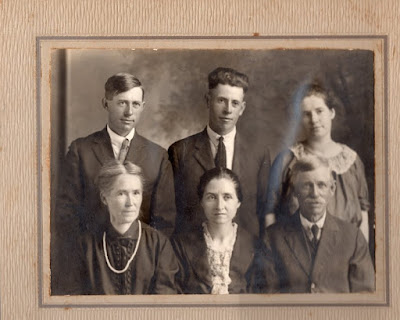