It's such a rewarding feeling to reap the fruit of these blog-posting labors, especially when a descendant finds a family photo here on A Family Tapestry. As I mentioned yesterday, I want to take the time in the next few days to update you on some of the emails I received, subsequent to sharing pictures from other people's family history.

You may remember the little lost photo album I began writing about almost exactly a year ago. Of course, the tiny treasure has since found its way back home, hand-delivered by a distant cousin to the granddaughter of Harry and Alice Reid, the couple who had originally mailed it off from Cork, Ireland, as an extended Christmas greeting.

That little photo album continues to reach out and call family members who, as it turns out, are also interested in their family history.

One of the photos in this album which connected me with current-day relatives of its 1936 subjects was the one labeled "A Little Tea Party." If you remember, the summertime setting included a photograph of sixteen individuals, all named in the album by Alice Hawkes Reid. Some of those people identified in the picture were young children at the time: besides the two Reid children, Ruby and Iris, there was a young girl named Daireen Foott and a young boy labeled as "Alfy" Allen.

Last summer, I had the opportunity to exchange emails with Daireen, who still lives in Ireland and now takes an interest in her family history. In one letter, she mentioned,


It is really interesting what things crop up when we are able to make contact so easily, and with the common interest of genealogy research.... I spend large parts of my days trying to sort and transcribe letters and research notes left by my ancestors over several hundred years, and storing my efforts on computer and with hard copies.


It was because of her avid interest in her family history that I had originally been able to contact her—owing to a connection she had with another family researcher who lives in Canada, and thanks to some search engine magic by a reader here at A Family Tapestry for leading me to that connection.

Yet another connection was just recently made through another person listed in that Tea Party photograph. The newlywed husband of a granddaughter of Alfie Allen got in touch with me, having discovered the photograph. Wishing to spruce it up with the digital wizardry now available for graphic design, this man wanted to obtain a scan of the original photograph to see if it could be enlarged and transformed into a Christmas gift for his bride, who also keeps many photographs of family members over the generations. So close and yet so far away, this Cork contact hadn't realized that the original is now resident in a place in his own county. This is a project that will need some additional networking to fulfill, but it is nice to hear from the people who radiate out from the list in that Little Tea Party entry.

Perhaps because there were so many people mentioned in that photo album, I've enjoyed receiving other such contacts, not just from folks connected to the names listed in the Tea Party portrait, but regarding other names mentioned in the album's pages. It is encouraging to see people coupling their interest in their family's history with the powerful connecting capabilities of this awesome digital age. We've finally come to a point where we really can reach out and touch somebody, no matter where in the world that someone might be. 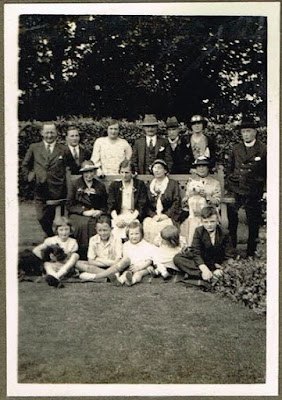