Syncing With the Season


Was it my luck that I accidentally ended up syncing my Family Tree Maker program with my Ancestry family tree last night—the eve of an extended holiday weekend? "This will fly through," was my first thought when I accidentally discovered I had uncorked the bottle and the syncing genie had already flown out; it was, after all, the time for all sane folks to be celebrating the season, not syncing their files.

I shouldn't have thought that so soon.

Somehow, the mixed emotions I felt about this were not unfounded fears. I have, after all, two different trees which each sporting more than ten thousand individual listings, at the least. Passing that ten thousand mark qualifies these as "big" trees.

To my surprise, my mother-in-law's 13,772 entries—at last count—went through the syncing process with no problem. The entire process gave me just enough time to have a leisurely dinner with family—and do all the dishes afterwards.

With an opening act like that, you'd think the second-biggest tree—my own mom's tree—would make it through in a snap. You know, maybe in less time than it takes to run a load of laundry. Or wrap thirty stocking stuffers. (Well, maybe fifteen...)

Doing anything right before Christmas is never a quick gimme. I happened to drive into town yesterday—hey, it wasn't even the last, Christmas Eve kind of shopping rush—and noticed the parking lot at one shopping center was so full that people had to park out on the street and walk two or three blocks, just to enter the back end of the parking lot. Cha-ching for all those lucky merchants. But what about the shoppers, still worried about finishing up that shopping list? Glad all I stopped by for was a cup of coffee.

And that was in beautiful sixty degree weather—under sunny blue skies, I might add. We Californians have a hard time getting used to the idea that it is now winter. The weather around here won't wake up to the fact that we've passed the winter solstice until maybe another couple weeks or so.

I pinch myself often around this time of year, mostly to remind myself that, if I don't wake up to the facts of the December calendar rushing by, I'll miss Christmas entirely. And we all know it is (at least according to Johnny Mathis) "the most wonderful time of the year." Who would want to miss that?

Meanwhile, I'm spending those valuable holiday hours pouting at my computer as the syncing process meter fails to budge. How do these things happen to me? I am not much for New Year's resolutions, but I believe this year, I am going to make one—and start it early. Resolved: to never get entangled in non-holiday endeavors during the last three days before the Big Event. If ever I needed a holiday version of the Cone of Silence, now is the time. I need a device I can step into which vacuums out all the interference with holiday cheer and good will. No Bah Humbug allowed! 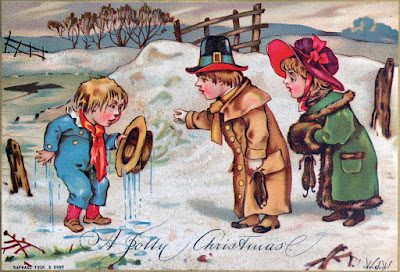 Above: Undated Victorian Christmas card printed by Raphael Tuck & Sons of London; courtesy Nova Scotia Archives Flickr photostream via Wikipedia; in the public domain.
© Copyright 2011 – 2022 by Jacqi Stevens at 2:47:00 AM
Email ThisBlogThis!Share to TwitterShare to FacebookShare to Pinterest
Labels: Holidays and Genealogy