How it Happened: Version One


Determining just what occurred to cause the tragic death of John Blain seems a straightforward process, if you rely on only one version of the story. There were, however, at least two different accounts of what happened, back in 1908 in Paola, Kansas. While it is possible that the truth is closer to an amalgamation of the two versions, let's take a look at each one separately.

First, we'll look at the document which was published closest to the time of John's death. It's an article from The Wichita Beacon, appearing on page seven of the Tuesday edition on June 23, 1908. If you are a Newspapers.com subscriber, you can view a digitized version of the original here.


At Paola, Mr. Blain was compelled to change cars. After he left the train, he was struck by the engine of an outgoing train and received fatal injuries on his head, back and chest. He was immediately removed to the office of a physician where his injuries were given proper attention. As soon as Mr. Blain was able to be moved he was taken to his home. Upon his removal to his home he steadily grew worse, suffering both from external and internal injuries. Word was received in the city yesterday by his sister that after suffering intensely from his injuries for three days that he had died.


That was the complete report on the actual episode, according to The Wichita Beacon. The article continued with a note about his survivors—his wife and four young daughters, as well as the "sister" in Wichita and her daughter. It concluded with a note that "the body will be taken to Walnut, Kans., for interment."

After learning that the man spent the last few days of his life in such agony, you will not be surprised to learn that John Blain's widow found reason to bring suit against the railroad company operating the locomotive which had struck her husband. Perhaps her legal counsel was convinced there was a basis for a wrongful death case.

That case against the Missouri Pacific Railway Company wound its way through an appeals process up to the Missouri Supreme Court and was not resolved until nearly eight years after the June day in 1908 when John Blain was struck down by one of the company's locomotives. 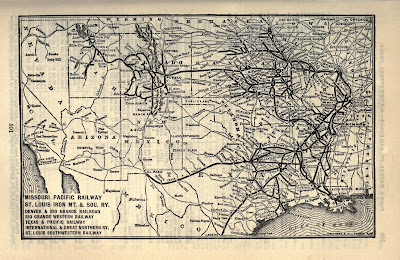 Above: From the 1903 edition of Poor's Manual of the Railroads of the United States, showing the lines of the Missouri Pacific Railway Company. Among the tangled lines, the one dropping southwest from Kansas City heads first to Paola. The city name is written sideways, making it harder to locate on the map. Image courtesy Wikipedia; in the public domain.
© Copyright 2011 – 2022 by Jacqi Stevens at 2:52:00 AM
Email ThisBlogThis!Share to TwitterShare to FacebookShare to Pinterest
Labels: Family Photos, Kansas, Newspaper Clippings, Railroads