Putting the Search in Context


One thing which seemed masked, in the search for Marshall Jackson in his home in Dakota Territory, was the context in which he arrived, lived his life, and eventually exited. Perhaps there is this sense of continuity assumed in any genealogical search: that while our ancestor obviously arrived at some point, the place at which he arrived had always been there—at least in some form.

Judging from census records, it appears to have been a young, single man of barely eighteen years who arrived in Pembina County from his native Ontario, Canada. Pulling our clues from the 1900 census, when he declared his age to be thirty seven, he gave his birth to be in the month of July, 1862. While his arrival out west in 1881 might have given the impression that he was a seasoned traveler, the fact was that he actually had barely grown up and left home.

In that same census, he indicated not only that he had arrived from Canada in 1881, but that he had become a naturalized United States citizen.

Sure enough, turning to the database at the North Dakota State University Archives, looking up his name in their naturalization records index yielded this result:

Marshall Jackson had filed his first papers in Pembina County on November 1, 1881. The follow-through occurred in the same county almost to the day, six years later.

Now, let's put this in perspective. In 1881, North Dakota was not yet a state—that didn't happen until the end of 1889. The county in which he filed his papers—Pembina County—was established in the northeast region of the Dakota Territory in early 1867, but didn't assume its current holdings until much later. Its shape morphed through a series of transitions that took it down in size from 1871, when it stretched from the Canadian border to nearly current-day South Dakota, to 1873, when the process began to carve eleven new counties from Pembina's borders.

That process had barely been completed when Marshall Jackson arrived in the region. To say where he actually settled might have been near impossible, without following the border changes through several iterations of map editing, if it hadn't been for two other documents.

One of those documents was the territorial census conducted in 1885. Transcribed and posted for free access on the North Dakota State University Archives, it shows us a young Jackson family—in addition to Marshall, his newly-wed young wife Hester and two year old son, listed as Bernard, at the bottom of this page—living in Cavalier, one of the counties carved out from the formerly immense Pembina County.

The other document which guides us to Marshall's whereabouts had a later date of origination: February 13, 1891. By the time that record was issued, Marshall was not quite yet twenty nine years of age, but he had just gotten himself named as a patentee on a land grant in Pembina County in the new state of North Dakota. In some ways, he and his family could be considered pioneers in that county's history.

Of course, at the time of the 1900 census, we can see the Jackson residence was located in the town known as Neche—said to be a Chippewa word meaning friend—and Marshall and Hester were by then the proud parents of two sons and two daughters. By the time the Jackson family left the state—best guess so far is 1904—Marshall had become well established in the county, thanks to his active duty as Pembina's constable.

By juxtaposing Marshall Jackson's personal timeline alongside the historical events of both the territory and the county, it reveals just how early in the history of the new state of North Dakota the family had actually settled there. 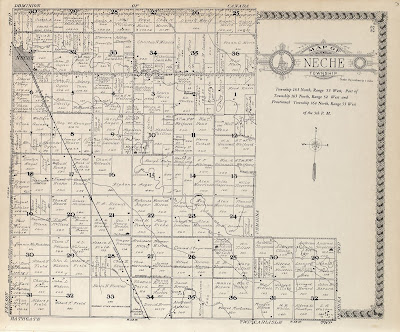 Above: Plat map of the township of Neche, North Dakota, from 1928—long after the Jackson family had left town; courtesy United States Library of Congress; in the public domain.