In retracing the steps on the timeline of constable Marshall Jackson's life, not all was newspaper coverage of his career in law enforcement. There were a few glimpses on the personal side in those Dakota Territory newspaper reports, as well, helping to paint a portrait of the man and his family.

The newspaper from the county in which he settled, after leaving his home in Canada, captured this moment in time on March 1, 1889, in The Pioneer Express:


Marshall Jackson, wife and family, have returned from the east. Their little boy was sick with the chicken pox when they left and he has been very sick since their return but is now slowly convalescing.


Given the date of 1889, it was impossible to tell whether the "little boy" the paper was designating was Marshall's oldest son, Burnett—who would, by then, have been five years of age—or their younger son, whose name turned out to be Earl, after all.

Still, one valuable clue in that brief insert showed us that the Jackson family had reason to visit someone—or something—back east. The trick in finding utility in that "back east" idea depends on the frame of reference of those choosing that descriptor. For those of us originating on the eastern seaboard, the phrase could only mean one thing: an east coast destination. But for those accustomed to midwestern ways, the term could simply mean a trip to, say, Iowa.

Wherever it was, though, chances were good that Marshall had not made his previous trek westward as a young, single man, alone. The possibility of family nearby—instead of far away, back in Ontario—increased ever so slightly with this detail from the local newspaper.

Second son Earl became the mention of the next clue found in newspaper reports of Marshall's personal life in North Dakota. Once again, it was The Pioneer Express providing the details, this time on October 4, 1901, in a section labeled "County News" under a subheading for Glasston:


As brief as that line was, it also provoked some questions. By 1901, young Earl would have been about fifteen years of age. Considering he was living back in Neche at the time of the 1900 census—just over one year previous to this news mention—what caused the change? There was little more in Glasston—then as well as now—than farmland and a stop along the Great Northern Railroad. Could he have moved the twenty five miles from Neche, simply to get a job?

Actually, hold that thought on the railroad. The Great Northern Railroad may well have been the very vehicle which brought Marshall Jackson to this part of the Dakota Territory in the first place. After all, the Great Northern had branches that ran northward to Canada from Dakota Territory and, like the Northern Pacific Railway—another company with early train service to Dakota with a northern line headed to Winnipeg—heavily promoted their service westward to immigrants and others seeking new opportunity as land in this territory opened up in the 1870s onwards.

Whether it was the Great Northern or the Northern Pacific that brought Marshall Jackson all the way from Ontario, Canada, to Pembina County in Dakota Territory in the early 1880s, one thing is sure: it was the easiest way to move back out again. And that is apparently what Marshall and his family did, in the early 1900s.

An entry in the April 3, 1903, edition of The Pioneer Express gave the first indication:


W. A. Murphy purchased the residence of Marshall Jackson, of Neche, recently. The latter will remove to the Northwest.


Well, take that last line with a strong dose of skepticism. You know those editorial foibles. As we already know, by the time of Canada's 1906 census, Marshall and Hester Jackson and at least their two daughters were in Winnipeg, listing their date of arrival in the Dominion of Canada as 1903. 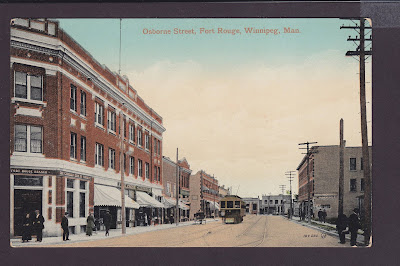 Above: An undated photograph, circa 1909, of Osborne Street in Fort Rouge, the section of Winnipeg in which Marshall Jackson and his family eventually moved, upon their return from North Dakota. This intersection was less than one kilometer from the Jackson home. From the Rob McInnes Postcard Collection, one of the collections featured at PastForward, Winnipeg's Digital Public History. Used by permission, with thanks to the Winnipeg Public Library.
© Copyright 2011 – 2021 by Jacqi Stevens at 2:56:00 AM