Two? Or Three? Still Not Sure

Newspapers may be a wonderful source for details on your family history, but they come wrapped with a flaw inherent in time-sensitive print media: reporting errors.

So, when I come across a newspaper article reporting that Homer and Ella Creahan Fulk of Bloomington, Indiana, had two sons—and yet, I’ve seen other reports of an additional daughter—what’s a family history researcher to do?

Never stop at one report. That’s solidly become my motto in this genealogical pursuit.

Even after locating a census record and a death record indicating that Ella Fulk—well, in the case of those Chicago records, make that Ella Faulk—did indeed have a daughter, here comes another newspaper report from the family’s hometown, insisting the Fulks had just two sons. What gives with that? And it was even in Ella’s own obituary, no less!

I’m beginning to wonder if Bloomington newspapers just had something against the daughters of their residents—at least in the Bloomington Telephone. Though I find no such corroboration elsewhere, the newspaper reports I’ve been able to locate on the family both indicated that Homer and Ella had only two children: sons Lyman and Robert. Frustrating. Especially when I'm trying to trace all the descendants of my Kelly family from Lafayette, Indiana. That includes daughters, too. 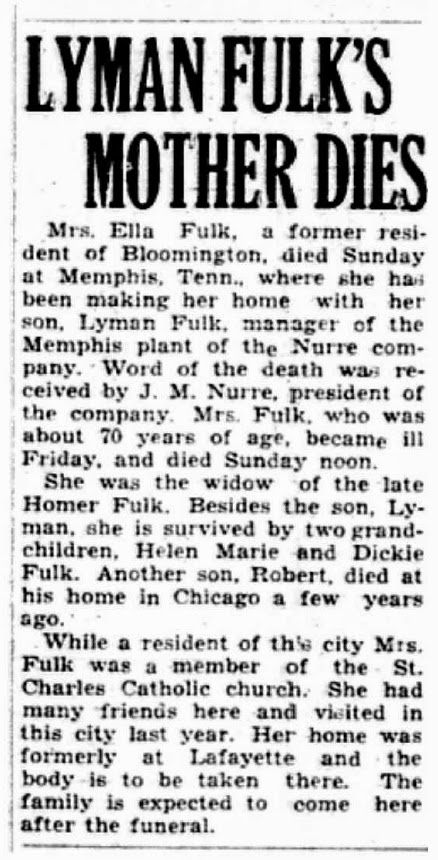 Mrs. Ella Fulk, a former resident of Bloomington, died Sunday at Memphis, Tenn., where she has been making her home with her son, Lyman Fulk, manager of the Memphis plant of the Nurre company. Word of the death was received by J. M. Nurre, president of the company. Mrs. Fulk, who was about 70 years of age, became ill Friday, and died Sunday noon.
She was the widow of the late Homer Fulk. Besides the son, Lyman, she is survived by two grandchildren, Helen Marie and Dickie Fulk. Another son, Robert, died at his home in Chicago a few years ago.
While a resident of this city Mrs. Fulk was a member of the St. Charles Catholic church. She had many friends here and visited in this city last year. Her home was formerly at Lafayette and the body is to be taken there. The family is expected to come here after the funeral.

© Copyright 2011 – 2022 by Jacqi Stevens at 2:46:00 AM
Email ThisBlogThis!Share to TwitterShare to FacebookShare to Pinterest
Labels: Kelly, Newspaper Clippings