Nurturing a Love of Music

Every time I come across a concert program in the files of Agnes Tully Stevens’ belongings, I hope it will be the missing item that shows some of the pieces she performed as a violinist while on tour in her younger years. But each time so far, I’ve been generally disappointed.

The simple program I pulled out of the stack for today’s post is no different. Though the paper is full of names of performers, search as I might, I could not conjure up her name among the list of those talented Chicagoans of a century ago.

On revisiting the details, though, that would not be surprising. This particular event took place when Agnes was only eleven years of age. While parents often start their children’s music lessons at early ages, one could hardly expect anyone other than a child prodigy to be of performance-level skill at that age.

Add this program to the tally for early impressions that formed a person into who she became. Part religious influence, part musical inspiration, this event was the dedication of a new church (or church building) not far from the Tully home. Though it was not the family’s own parish—they attended St. Anne on Garfield Boulevard—it was a neighboring parish. On the corner of that same street—Garfield Boulevard—and Peoria Street, the Church of the Visitation was dedicated on one special Sunday in November, 1899.

What a glorious occasion it must have been. There were morning and evening festivities. None less than the President of Notre Dame University was there to speak. There were many other dignitaries there to join him. And the musicians.

Oh, the music! We’ll take a look at the program in tomorrow’s post, but suffice it to say it must have been worthy of the celebration. How special that must have been to the young Agnes—special enough, at least, to impress her to hang on to the program itself for the rest of her life.

I often wonder what thoughts there were to prompt Agnes to decide to keep such things. What memories were embedded in that paper—invisible to people of another generation like me, but which sprang to life with one’s knowing glance at the page? I guess it’s those hidden aspects of an ancestor’s life that I wish I could resurrect from oblivion with my research. Wouldn’t it be grand to know those sparks of life that lit up one’s face and allowed that person to thrive despite all other difficulties?

Pursuit of that impossible quest would, in itself, make quite a story. 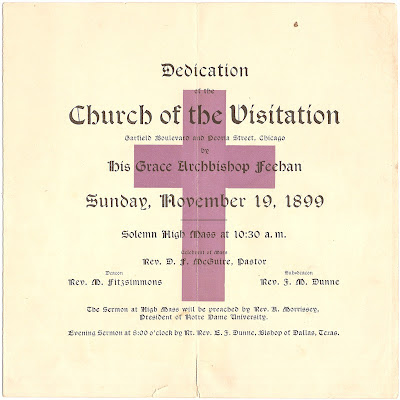 The Sermon at High Mass will be preached by Rev. A. Morrissey,
President of Notre Dame University.