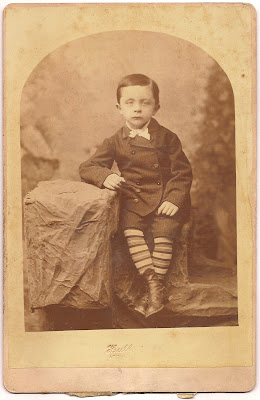 While Agnes Tully Stevens may have done well in passing down her collection of letters and other written documents, I cannot say that photographs fared as well under her care. Perhaps that was owing to the “help” of several children in the Stevens household. A picture is perhaps more attractive to younger eyes—more attractive, at least, than a letter which can be secretly folded up and tucked away in a quiet repository in the back corner of a bedroom dresser or writing desk.

So, along with the bedraggled likeness of “Uncle Will” from a few days ago, we feature another cabinet card today. This one, while at least preserving the subject matter intact, boasts for a backing a misplaced magazine ad for Strickland’s Stomach Bitters—which, perhaps thanks to the contents of the very bottle itself, found an adhesive to bind its glossy record to the back and underside of this photograph.

As for the reverse—the front, that is, of the photograph—there is no mark identifying the young subject other than the Chicago studio’s imprint, which reads simply, “Hull, Artist.” The boy seems accommodating enough for the photographer, as well as for his mother, whoever she was, who carefully parted and combed his hair in a presentable manner. His outfit, a double-breasted pin-striped suit, is remarkably offset by eye-catching legwear.

I would, of course, love to know who this young gentleman was. But unless other details surface from the now quite diminished collection of Agnes’ papers, I guess I will never know.
© Copyright 2011 – 2022 by Jacqi Stevens at 2:46:00 AM
Email ThisBlogThis!Share to TwitterShare to FacebookShare to Pinterest
Labels: Chicago, Stevens, Tully, Unidentified Faces