Making the Most of a Last Minute Opportunity

Lately, there have been a lot of genealogy-related posts on preparing for research trips. With coveted archive collections housed in destinations like Salt Lake City and Fort Wayne, the overwhelming resources concentrated in such facilities nearly compel a visitor to be well-prepared. After all the time and expense involved in traveling to such destinations, that’s the only way to make it a cost-effective visit. 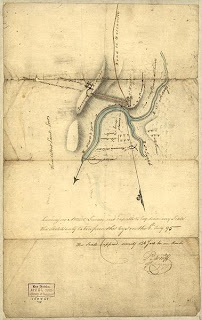 But what if, while on the way to some other destination for some other reason, you realize that with a little tinkering of the itinerary, you can jigger next week’s road trip to include a stop at your favorite genealogical dream destination?

That was the situation I found myself in, as our family flew back east to Chicago and then planned a drive to Ohio. At each wifi-enabled coffee stop along the route, as I tapped into my Google Reader, I ruefully noted such posts as Marian Pierre-Louis’ August 2 entry, “Planning a Research Trip.” And all her posts leading up to that point, starting with the one published the day after we left Fort Wayne: “When to Start a Research Plan.”

What’s a last-minute procrastinator to do?

By taking the state highways instead of the interstate freeways, I had realized I could re-route our family through Fort Wayne instead of Indianapolis, and shave seven minutes off the total drive time, to boot. Add a hotel stay in the middle of the journey, and voilà! An instant six hour chunk carved out of our travel plans. Right next to this fabulous genealogy library.

So, now that the deed is done—despite the well-thought-out advice of the experts—here’s what I can do to salvage a list of “What To Do When a Fabulous Research Opportunity Falls Into Your Lap Even if You Weren’t Prepared To Go.”

Step #1: For crying out loud, who cares if you were prepared or not?! Just GO!
Don’t even think about being prudent or polishing your fallen halo with a false-modesty comment like, “I wouldn’t even dream of going there until I deserved to go by virtue of my impeccable preparation skills.”

Step #2: Do everything you can do to prepare.
Cut to the chase. Eyeball the time you have left before your departure time and figure out how much data you can assemble for your trip. Even though your prep time is short, if you already have records in a genealogy database, you can use that program’s print-out options to generate lists of the specific ancestors you want to zero in on. Better yet, if you already have your data in a web-based system, and can tap into that via your laptop and the internet, do so. Our three-person family research team came to Fort Wayne armed with two laptops and an iPad. Research tables embedded with electrical outlets to spare those batteries, plus wifi access made our limited time at Fort Wayne as productive as possible, by allowing us to check our Ancestry.com and Rootsweb.com family records if we ran into questions that my thumbnail-sketch print-outs didn’t address.

Step #3: Orient yourself to your destination library before arriving there.
While our family had done research in the Allen County Public Library before, I realized it had been at least ten years—and a construction project—since we had last been there. Things had surely changed. Reviewing their website revealed an Orientation Video, as well as online catalog access. There is even a “How To Get Started” link for people just beginning their family history research. It was quite unnerving (but in a serendipitous way)—having watched the Orientation Video at the hotel just before heading to the library that Thursday night—to walk into the genealogy section and see, seated at the librarian’s desk, the very person I had just seen a few minutes before on the video. Right then, I went from “oriented” to déjà vu!

Step #4: As much as possible, utilize online resources before arriving.
This was the part of the trip that my unforgiving time squeeze didn’t permit. For those with the luxury of more time to prepare, the Fort Wayne genealogy collection also includes a sizeable portion accessible online, as well as a catalog of their holdings that can be perused from home.

All in all, if I had it to do over again, I certainly would not have put myself in that time-squeeze position. I would have loved to have more time to prepare.

On the other hand, if I demanded more time up front, I probably wouldn’t have had the opportunity to stop by at all.

Sometimes it all comes down to that cold cost-benefit analysis: take the opportunity when it presents itself? Or hope for another, more well-prepared chance in the future?

Above right: 1795 map of Fort Wayne prepared for General Anthony Wayne by P. M. Neff; pen and ink mounted on cloth backing. Courtesy Library of Congress via Wikipedia. In the public domain.
© Copyright 2011 – 2022 by Jacqi Stevens at 2:42:00 AM
Email ThisBlogThis!Share to TwitterShare to FacebookShare to Pinterest
Labels: Fort Wayne, Online Resources, Research Journeys, Tools for Beginners