The Famous Guy in the Family Photo Album

Anyone remember seeing this photograph? 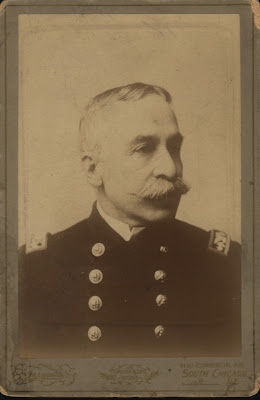 It’s been nearly five months since I blogged about the mysterious subject of a Cabinet card on loan to me at that time. This photo came to me via the Minnesota family of my husband’s grandmother’s cousin, Edna Tully McCaughey. Since we were heading back east to visit family at the time this photo collection came to me, the hope was that someone in our family would recognize that face and identify a long-lost relative.
The trip, itself, yielded no hints as to this gentleman’s identity. Although I also posted queries to my two oft-used genealogy forums, I received no leads other than deductions based generally on the details of the man’s uniform. Though the September 15th post, itself, generated more hits than any other I've written for this blog, the additional traffic failed to generate any substantive answers.
I hardly dreamed this picture would be of anyone significant. After all, it was amidst a collection of family portraits, this one with the imprint of Chicago photographer Jarmuth. Never mind that the history of the Cabinet card’s predecessor, the Carte de Visite, was popularized by such luminaries as Napoleon III—or that those same techniques became the vehicle for widespread distribution of the likenesses of well-known leaders and celebrities in our own culture in the mid to late 1800s.
This photograph from Edna Tully McCaughey’s collection, evidently, was no exception.
Just the other day, a reader—“Steamboater”—found my blog post from last September and entered a brief comment:


“This is US Admiral George Dewey, who was credited for winning of the battle of Manila Bay in the Spanish-American War.”

Though always wishing to be gracious to my visitors, I confess I did slip off and plug that name into my Google Images device. To my amazement, it was indeed so. Despite being thrown off by the insignia of the Chicago photographer on the face of the card, and even though Edna Tully McCaughey’s collection included several pictures of well-known actresses of the time, I totally had not entertained the possibility that this would be the likeness of a non-family member.
And yet, it was.
The Google Images search yielded several copies of that same photograph. One sourced it to a book published in 1899, providing a tighter time frame for when the picture was taken.
So, first, to Steamboater: a thank you for solving the mystery of this man’s identity. Thanks, also, to those volunteers who frequent the genealogy forums and took the time to help me figure out anything—anything—about this subject.
Which leads me to say: thank you to all of you who take the time to become part of the continuing online conversation, each helping one another other out in our quest to further research in so many lines of inquiry. That “crowdsourcing” mindset has become the mode for sharing so much more information and knowledge than any one of us could ever amass on our own.