How frustrating it is to find a tidbit of usable information in a genealogy search, and then not be able to appropriately use it for lack of proper documentation. After all, what do you call those un-footnote-able sources like, "Some guy online told me so"?

While two wrongs don't make a right, two mis-attributed sources at least serve to offer me a bit more confidence in their veracity. Take, for instance, the wonderful find I unearthed in our family's heritage-finding fun fest the other night. On a time-faded slip of paper, I found the hand-written note:


From the baptismal registry
of Ballina and Boher I hereby
certify that John of Denis
Tully and Margaret Flannery
was baptized on the 24th
February 1842. John O'Brien
+ Mary McNamara acting
as sponsors.
Given at Ballina, Killaloe
Collare on this the 7th March
1887.
James O'Brien
C.C.
What makes that such an encouraging find for me is not just the information, but the fact that I had already found a similar confirmation. A few years ago, I happened upon some information that linked our Tully family line with that of a specific Ryan family in Ontario and Winnipeg, Canada. I accidentally stumbled upon a specific member of that family, thanks to the help of an online genealogy forum, and he had sent me an email detailing his branch of the family heritage, as passed down to him from his father's handwritten notes. Among those items was his note:
Here is what I found:  A certificate of Baptism that Johanna Tully,
"born of" Denis Tully and Margaret Flannery, was baptized May 28,
1832 at Ballina, (presumably Ireland). Witnesses were Luke Tully and
Kitty Flannery. The certificate was issued to someone by Father Maher
on May 22 1892.
Now, I don't know how The Footnote Maven--the "Miss Manners" of genealogical documentation--would handle acknowledging this piece of evidence, but I'm pretty sure.there is something very un-academic about citing something as "this guy told me...."
Nonetheless, I'm glad to know that I have a second scrap of paper that basically replicated that same process for a sibling. While the dates were different, the priests listed were not the same, the parentage and hometown location are certified enough for me to know where to continue my search.
Prior to this week's discovery, and thanks to the help of other forum researchers, I had found a possible entry in a Canadian census record that seemed to match my Tully family. However--and isn't it always the case that things don't quite align themselves perfectly just when you wish for them to cooperate and do so?--the entry for daughter Johanna was spelled "Johan" and marked with a frustrating over-written M and F for gender designation. Why would an Irish family name a child by the German-sounding Johann, I reasoned. Why, too, would an Irish family do so when they also named another child John? My heart hoped for the Johan to be a census taker's error, and opted for that older child to be a daughter. But an irksome nagging plagued me, and I could never be sure my hopes were the way things really were.
I knew from family oral tradition, though, that a sister in the Tully family had married a Ryan, and that they had ultimately moved from Ontario to Manitoba. Their descendants had kept in touch with the descendants of our branch of the Tully family until at least the middle of the 1900s. With the help of that note from the Ryan family descendant I stumbled upon online, I was able to construct a family tree for his side of the family that did link him to Johanna Tully Ryan, and provide a plausible explanation for how his family and ours connected. But I didn't yet have a bona fide paper trail.
With this second--and similar--discovery, while handwritten and certainly not bearing the marks of officialdom, I still don't have what I'd consider to be classic confirmation. However, I think I've found enough to convince me that I've earned the right to hop the ocean and begin searching in earnest in the Tully family's fatherland. 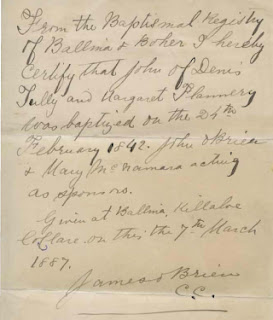