What About the Williams Line?

Sometimes, family history research takes the form of speed searching. That certainly was the case when I took a whirlwind tour through the Williams line of Maude Woodworth Bean's maternal grandfather. My goal—the overarching goal of this month's research—is to see which line related to the Woodworths might have passed along the Marfan Syndrome which manifested itself in Maude's sons, nephews, and even grandson.

Speed searching through the paternal line of Maude's mother Effie Aurilla Williams didn't point to any lives tragically cut short in their prime—although, oddly enough, there were a couple spouses who did die at a relatively young age. However, one unexpected discovery emerged as I read through the marriage announcements and obituaries for the various Williams relatives.

Effie's brother Arthur Williams had three sons, one of whom—Ray—held a bachelor's degree in music and was noted to have served as soloist at his younger brother's wedding. (Considering this musical bent in the family, I couldn't help but wonder whether that youngest brother's name—he often went by "A. Minor Williams"—wasn't an inside joke in the family.)

The mention of musical talent in the family caught my attention for two reasons. First, the former owner of the photographs I had rescued from a local antique shop, Marilyn Sowle Bean, had a musically talented son, herself. That was the son who lost his life to Marfan Syndrome.

Then, too, in Marilyn's photographs was a picture of her brother-in-law—Sam, the poodle trainer for the Ice Follies, who also died of Marfan Syndrome—playing his guitar and singing with friends at an informal evening gathering. The family had always left me the impression that somehow such well-developed talents as this were a hallmark of the syndrome, but here was an example of musicality minus malady.

While the propensity to perform artistically may have been passed down to Marilyn's son and brother-in-law from the Williams' line, in my rapid-fire race through the Williams pedigree, it didn't appear there was any sign of Marfan Syndrome in that side of the family.

However, as often happens in such searches, there were a few other details of interest that I'd like to pause and examine. Call it the Bright Shiny Object Syndrome if you will, but before we judge such a dalliance, let's just call it productive exploration and grant a day's lenience to explore a bit more about the Williams line. 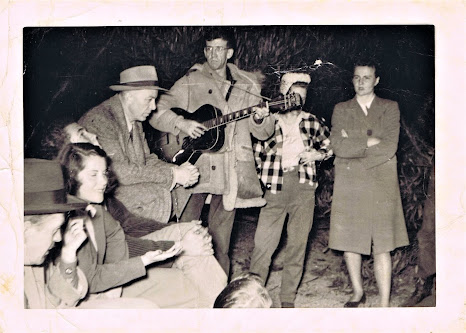 Above: Photograph of Maude Woodworth Bean's son Sam playing the guitar at an informal outdoor gathering; undated picture from the collection of Marilyn Sowle Bean.

© Copyright 2011 – 2022 by Jacqi Stevens at 2:48:00 AM
Email ThisBlogThis!Share to TwitterShare to FacebookShare to Pinterest
Labels: Bean, Medical Issues, Williams, Woodworth