From our childhood, most of us can recall a fun relative, someone who had the knack of creating special memories that last a lifetime.

Thumbing through the family photographs rescued from a local antique shop, I spotted a couple snapshots which captured that special kind of memory. Each time she saw them, those photos must have given Marilyn Sowle Bean, the woman whose pictures they once were, another chance to smile and remember.

Several of the photographs—I'll be sharing them in some future weekend posts here—featured Marilyn's brother-in-law, Samuel William Bean. Named for his father, a blind and deaf poet and chess champion, the junior Sam saw opportunities which led him down a different path than his father.

I've written about Sam in the past. Quite a bit, in fact. Sam had a fascinating line of work: serving as the poodle trainer for the Shipstads and Johnson's Ice Follies.

A fascinating career, that is, until Sam's untimely death, owing to Marfan Syndrome, in 1955.

I had seen pictures of Sam at work before, from when I had inherited Sam's own uncle's photo collection. All taken in black and white, the usual medium for the average consumer's collection at the time, the photos all featured Sam and his charges at work, behind the scenes before show time. 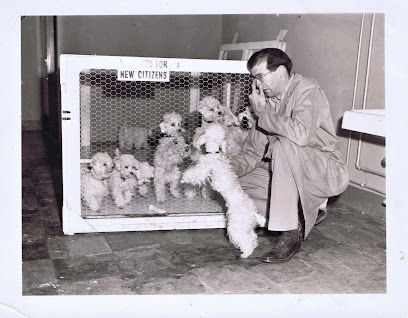 What was so special about Marilyn's version of the collection was that it featured one additional picture which spoke to a mother's heart: her four year old son standing in front of the traveling kennel, getting to hold one of the "stars" of the poodle act.

I can pinpoint the boy's age simply because of when the family lost Sam. Though his nephew was so young when he had the chance to form these fun memories, they became experiences he never forgot, no matter how far removed from the time of that visit, not long before Sam's sudden and unexpected last curtain call. 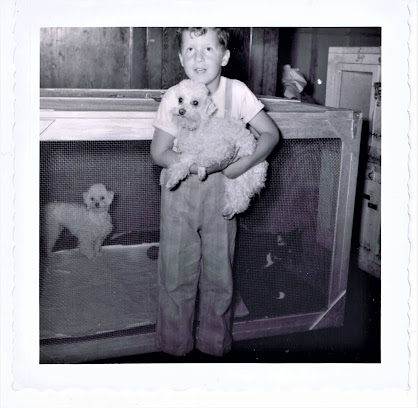 Photograph above: Sam Bean, trainer for the Shipstads and Johnson's Ice Follies poodle act, with his charges; below: Sam's four year old nephew Greg, holding one of the poodles during a visit in 1955 with Sam at work.

© Copyright 2011 – 2022 by Jacqi Stevens at 2:53:00 AM
Email ThisBlogThis!Share to TwitterShare to FacebookShare to Pinterest
Labels: Bean, California, Family Photos, Occupations