It is always exciting to stumble upon personal details of an ancestor's life which reveal closeness to action confirmed by reports of world history. Discovering that my godmother's father Michael Melnitchenko, chief officer of the S.S. Richard Olney in 1943, endured a harrowing brush with wartime destruction aboard ship, makes me want to discover more about that experience. I want to know what brought him to that fateful moment, and what the plan had been, had the mission gone as planned.

Before we can discuss details of the mission of the Liberty Ship S.S. Richard Olney, though, we need to realize many other plans needed to fall into place—and to do so in a systematic sequence. Here are those many preparatory steps.

The Liberty Ship S.S. Richard Olney was launched January 22, 1943. Sometime before the end of March, 1943, when Captain Erich Richter took charge of the ship, the Richard Olney was berthed in New York harbor, having recently arrived there from Santiago, Cuba. At that point, Michael Melnitchenko was not among those listed as crew members, and I am not able to locate any record of his having been added at that early date.

However, by the time of the ship's crisis on September 22, 1943, Michael was serving as chief officer, according to his written report of the morning's incident. The S.S. Richard Olney was part of a convoy in the Mediterranean, headed to Salerno in the wake of the Allies' invasion of Italy.

Every step along the way to that destination required several other steps to have been successfully cleared out of the way, before the Richard Olney could even begin to enter the Mediterranean Sea.

Awaiting the right moment to begin their own mission, in September 1943, the Richard Olney had been berthed at the port of Oran in present-day Algeria—but shortly before that, at the start of the second World War, that wouldn't have been possible.

For one thing, the Mediterranean had effectively been closed to merchant marine traffic since 1941, due to Axis control of the area. In addition, Algeria had been part of French North Africa. But early in the war, France had fallen to the Germans, which impacted the French territories of northern Africa as well, effectively closing off Allied access to the Mediterranean. Operation Torch began clearing those formerly French holdings from the Axis powers, enabling the Allies access to key African ports, including the Algerian port of Oran and ports in nearby Tunisia, including Bizerte, in May of 1943.

That, in turn, cleared the way for Allied forces to mount an attack of nearby Sicily in July from those north African ports, further securing Allied access to Mediterranean waters, and especially paving the way for invasion of Italy. That final operation was what brought the crew of the S.S. Richard Olney to land there in Oran, preparing for and awaiting further orders in September, 1943. 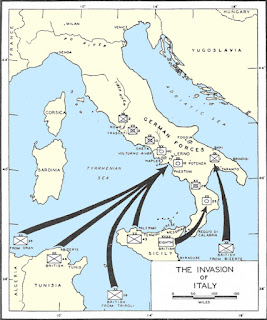 Above map: the plan for the September 1943 Allied invasion of Italy at Salerno, following which the S.S. Richard Olney was to join a second convoy from Oran; colorized version of map courtesy Wikipedia from original government document; in the public domain.