Discovery by D N A

There is a saying making the rounds in genealogy circles here that DNA doesn't lie. True, if we are using a scientifically sound sampling method to gather a sufficient number of "SNPs" and accurately evaluate them and compare them to other just-as-soundly gathered samples, any sizeable matching patterns will point to familial relationship. Still, I'm a stuck-in-the-mud stalwart when it comes to insisting that we rely on the paper trail as well as genetic genealogy before leaping to conclusions. Not always is there an "NPE" lurking behind every family tree.

In my current research challenge—I'm trying to figure out how a DNA match pointing back to a Most Recent Common Ancestor shared with my husband could come up a different genealogical conclusion.

That MRCA (Most Recent Common Ancestor) would be Denis Tully, the Irish immigrant who sailed away to Canada from what surely would have been a life of extreme deprivation back in this homeland. Denis—at least according to my best estimate—would have been my husband's second great-grandfather, not a very distant relative at all.

Of all his DNA matches listed on Ancestry.com's ThruLines tool for Denis Tully, my husband's closest match from a non-direct line (in other words, not his first great-grandfather John Tully's descendants) comes from a third cousin whose lineage is nowhere on my radar. According to this other researcher, he descends from the line of a man also named Denis Tully, son of the Denis Tully, our MRCA.

Problem: though this match might assert this, we have no Denis Tully listed as son of Denis Tully.

Granted, if this match were still alive, he would be an excellent candidate for taking a Y-DNA test, as his is a direct patriline through to Denis—which possibly could reveal some deeper ancestral connections for that particular surname. As it is, my husband's line, while passing through his father, then takes a turn to the maternal side before resuming its paternal route back through the generations. All we have to rely on would be matches through any autosomal connections.

There are, however, other tools at our disposal. In fact, more and more tools are being developed, chipping away at the task of puzzling over those mystery matches. Take the beta version of Ancestry DNA's Chromosome Painter, released just this past week. Trailing the recently released Ethnicity Inheritance graphic which Ancestry dubbed SideView™ is this new tool allowing us to view a breakdown, by parent, of major ethnicities inherited, according to our DNA test results.

Finding that latest addition on Ancestry's website, the Chromosome Painter, seemed to be a well-kept secret. It is parked under the "DNA Story" tab on the Ancestry toolbar. Scrolling down beyond the "Ethnicity Estimate" page on DNA Story to the second sheet, "Ethnicity inheritance," the Painter beta tag, "View Breakdown" is located just below the now familiar colored, split circle graphic. 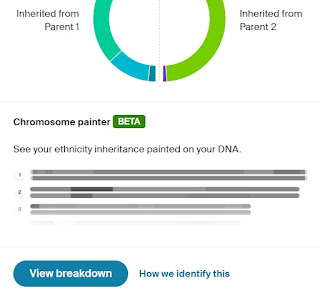 There are, of course, other ways to reach this information. In my excitement to find this new toy at Ancestry, I had scrolled right past the tab which would have given me direct access to what I was seeking. Notice the choice, right at the top of that same page, labeled "Chromosome Painter." Oh, duh. And, if you get sidetracked and go directly to the Parent 1/ Parent 2 overview, you can scroll a very long way to the bottom of that graphic and find a third way to access the Chromosome Painter, as well. 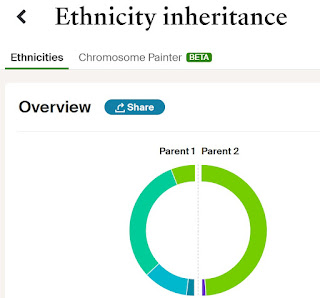 What was interesting to me—though no surprise whatsoever—was to find the graphic confirmation that my husband's "Parent 2" had a nearly all-green readout for his Irish roots. 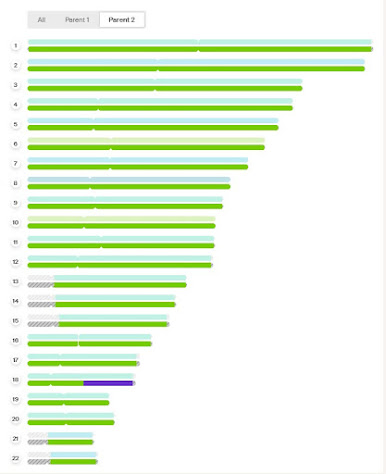 Small wonder, considering that all eight of that parent's own great-grandparents were born in Ireland. The likelihood that our DNA match was just as monochromatic is quite as high. The direct line connecting this DNA match to our MRCA goes from Tully, to Tully, to Tully, to Tully. No surprise with those surnames: all unmistakeably Irish. It's the given names that have me thrown.

This is where we kiss goodbye all those fancy DNA tools and hit the books, looking for the right paper trail. Before we do that, though, I do have to confess I have some misgivings about that proposed Denis, son of Denis in our match's tree. And that's something we'll need to talk about. Monday.