When we work on adding a new collateral line to our family tree, the focus is often on drawing up a solid proof argument. That litany of reasons to add a specific ancestral relationship may seem to focus on the positive. We look for documents that confirm the relationship.

There is—or can be—a negative side to such research. As much as no one wants to be considered negative, it's important to be able to also outline the reasons for rejecting a hypothesis.

In evaluating a DNA match to my husband's Tully line, it seems there is little on paper to confirm the connection between my husband's ancestor, Denis Tully, and this DNA match's ancestor, also named Dennis Tully. There are certainly hypotheses out there—witness the many trees on Ancestry.com which claim the younger Dennis is actually son of our line's Denis Tully. And yet, there is one vital ingredient missing in this mix: documentation.

Not that I mean to get negative, but there is one detail which kept popping up as I tried to make these two jigsaw puzzle pieces fit together: a funny designation added to some of the trees. Here's a snippet from Ancestry.com's ThruLines proposal of how our two families might fit together. 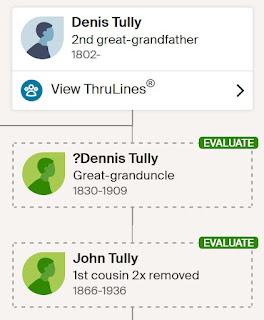 What was up with the question mark, I wondered. I already knew the dotted lines around some names signified those individuals were not part of my own tree, but were merely suggested for my consideration. The green "Evaluate" box, when clicked, brings up a panorama of other Ancestry trees which include the individual in question. Subheadings in that pop-up box also allow the viewer, by clicking on the down carrot, to examine the details of such items as documentation. Guess which link I headed to first?!

The sad part was that, of all the Ancestry.com trees listed, not a one included documentation for the other Dennis Tully predating his arrival in Canada. So how did any of these researchers assert that Dennis, born 1830, was son of my husband's second great-grandfather?

Perhaps it all came down to that question mark curiously placed in front of the younger Dennis Tully's name. I found that same configuration in more than one tree. Thinking it might have been a way for Ancestry to signify the first in a sequence of suggested relationships, I looked at other ThruLines results for both my husband's matches and mine. Turns out nothing like that showed up in any other family lines.

The strangely-placed question mark is likely the fingerprints of someone whose original entry was copied. Sure, one person wanted to use a way to signal, "Hey, I'm not sure about this guess." Despite the warning sign, it wasn't enough to deter anyone else from copying the entry wholesale.

I have read of people who struggle with the choice of whether to make their tree public or private. One concern is that, in the process of making the honest mistakes we all can make, someone will spot the entry and be tempted to copy it to another tree rather than first ensure it is correct information. I recently read someone's explanation for choosing to go public, while entering a strongly-worded warning to copy at one's own risk. No matter how talented a word smith, I doubt there is anyone able to craft a warning sufficiently strong enough to deter copying.

When that situation comes back to bite us in the form of suggested lines of descent on ThruLines, we have yet another reason to step back and take notice—and not fall for copying the suggestion wholesale. Denis and Dennis may be one such instance. I am finding all sorts of reasons to discard the suggestion of father and son. In other words, my negative arguments are building some real muscle in this research struggle.

And yet...the DNA connection is still there. Time to explore some alternate proposals in the quest to figure out just how these two DNA cousins connect.

© Copyright 2011 – 2022 by Jacqi Stevens at 2:50:00 AM
Email ThisBlogThis!Share to TwitterShare to FacebookShare to Pinterest
Labels: DNA Testing, Ontario Canada, Tully