The New York City resident listed as "Mary" in the 1910 United States census may have been the woman I discovered to be my paternal grandmother's own mother, but—true to form in researching this family line—that was not her real name. Oh, she was wife of Anton Laskowski, alright, and she brought with her three children on her trip across the Atlantic from Poland, but Mary was more likely the Americanized version of her name.

I first found her real name after following her connection with the Laskowski family through several documents. We saw yesterday the census record where I first located this Mary, along with my grandmother—revealing my grandmother's real married name. Sophie, my grandmother, was listed as daughter of a couple recorded as Antone and Mary Laskowski.

Learning about the Laskowskis—and in particular, trying to determine when they arrived in New York City—presented one challenge. With each decade's enumeration, the family's year of arrival in the United States changed. In the end, records claimed they arrived here any time from 1889 through 1892. While that was not an impossible date range to tackle, this was New York City and, as I discovered, Mary Laskowski was a fairly common name among trans-Atlantic passengers.

If it were not for New York State's decision to authorize a separate census in 1892, I might not have gleaned some useful information on the Laskowski household—and at least eliminated one report of their date of immigration. The 1892 state census, taken on February 16, not only provided the names and ages of everyone included in the Laskowski household in Brooklyn, but it became my means to at least eliminate one report of arrival: 1892 was a date likely too late to be a viable report. 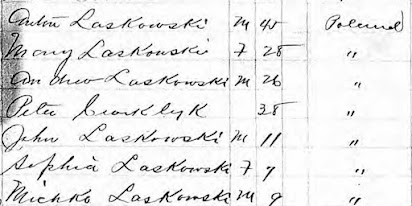 In trying to zero in on the actual date of the family's arrival in New York City, there were two additional details which could have helped my initial search. The first was the Polish tradition of altering the surname of women to end in "-a" rather than "-i." So, for instance, instead of looking for Mary Laskowski, it would have been more helpful to search for Mary Laskowska.

However, in addition to that custom specific to women of Polish origin, there was another detail: her given name. It wasn't until I finally located Mary's passenger record—both the record completed by the port where she departed and the listing turned in on the American side—that I found her actual name.

With that discovery, not only did I realize she was traveling to meet her husband, who had already settled in New York, but I gained the Polish version of her children's names, as well. Along with eight year old Johann, four year old Miecyslaus, and toddler Sofie, their mother was identified as Marianna Laskowska.

Almost as a footnote to that discovery—at least according to the Hamburg passenger list—listed alongside Marianna was a single man by the name of Miecyslaus "Gremlowitch," whom we'll discover later this month was not just a coincidental listing, but actually a young man related to the Laskowski family. That, of course, jumps far ahead of our story, but is helpful in guiding research when family members cluster together on records. First, though, let's take a closer look at the woman we now know as Marianna. There's more we need to discover about her family.

Above: Excerpt from the 1892 New York State Census for the Laskowski household in Brooklyn; image courtesy Ancestry.com.