When our ancestors left their homeland to settle in America, they might have said they were traveling to the New World, but when we trace their steps back home, that "Old World" becomes a new place for our research efforts. Sometimes, we need some processing tips to help handle the information overload.

Sure, gleaning names and dates from baptismal records or marriage certificates may be the same in some ways, no matter where we search. But when the language our ancestors claimed as their native tongue contains some characters not resident on our twenty-first century keyboards, we need some work-arounds. That's what I'd like to interject here, today.

Looking for my paternal grandparents' roots in Żerków, Poland, taught me quickly that I needed to equip myself with the ability to produce such non-English markings, or diacritics. If I were to reside in Poland for any amount of time, the logical step would be to obtain a keyboard which includes those special characters. But here I am, enjoying the last rays of sunshine in a pleasant autumn in California, far from any opportunity for such a purchase. There is, however, a way around that.

Of course, I believe it is helpful, in researching our ancestors in such a country of origin, to first understand the basic pronunciation of that native language, and, along with that, to learn to recognize those special characters of the language which are not familiar to English-language natives. I'm not talking about a Ph.D.-level deep dive here, but a sufficient introduction to the rudiments of the language.

Once undergoing such an introduction, I want to use those characters in my family tree. It's just a personal preference of mine to write, for instance, Elżbieta for another one of my second great-grandmothers, instead of Elzbieta—but in using some Polish search engines, it might be necessary to include the diacritics to conduct a correct search.

My trick is to use a work-around to coax my American laptop's keyboard into talking like Polish is its native tongue. I do that by using Google Translate. Here's how.

First, on the Google search page—or even on gmail, if you use it—look in the top right corner for the nine "tiles" stacked together.

Click on that icon to open up the many apps available on Google. 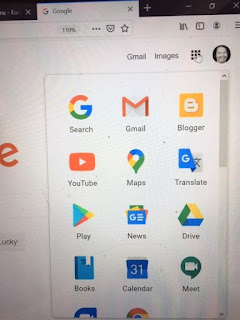 Find and select the choice labeled "Translate"—which, depending on your previous use, may or may not be located at the same place as in this example. (If you don't see the choice "Translate," grab the slide bar to scroll down the inset until you locate that choice.) By clicking "Translate," you will now see the generic Google Translate screen, which will look somewhat like this:

Notice two things about the Google Translate screen. The first is that the screen is divided in half, with the left side being the language to be translated from. There are a few language choices listed (your example may show different languages). To the right of the listed languages is a down arrow. If you click on that, you will see a much wider selection of languages. Choose whichever language you want to use for typing special characters.

Here is what that expanded screen would look like (partially):

You can click on any of these languages to use for typing your ancestor's name (or any other details in your ancestor's native language). Obviously, in my case, this is where I've been camping lately to utilize those Polish diacritical marks, but your ancestors may have come from another area of the Old World.

Once you select your target language and are back on the original screen, look for the second item you will need to accomplish this writing task: a tiny icon which, if magnified, looks like a keyboard. This is where you will find it:

Of course, once you see this, you will think, "That's not remarkable at all." Yes, it looks somewhat like an English language keyboard. However, to gain access to the goods you are really seeking, you want to click on the lower left corner of the keyboard, where it is labeled "Ctrl + Alt." Once you do that, it will reveal a second page of characters, like this:

If you wish to use capital letters rather than lower case letters, you simply click on the up arrow in the lower left hand corner of the keyboard, just above the "Ctrl + Alt" key we just used. By doing that, in our Polish example, you will see:

Now comes the fun part. Using your mouse (or slim finger if you are using a touch screen), click each letter you wish to type, and it will enter that character in the translate-from screen. It doesn't matter the order of the words, because for your next step, you will cut and paste each typed word independently into the document where you wish to add it.

Here is an example of my Polish great-grandmother's first name and place of birth: 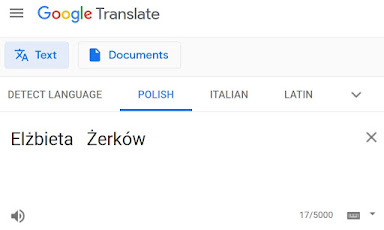 Now, cut and paste each word into the place you've selected in your target document—a letter, a blog post, an entry in a family tree. In this example, those two words were plugged into this woman's profile page on Ancestry.com, and the result looks like this:

Of course, once you have that Google Translate page open for writing all those special characters unique to your ancestors' native tongue, keep it handy for each time you access a foreign website. Even the English-language versions of those Polish websites I've been recommending this week as I explore my great-grandparents' roots can sometimes include sections only available in Polish. I keep my Polish version of Google Translate at my fingertips and, undaunted, play the role of the intrepid researcher.
© Copyright 2011 – 2022 by Jacqi Stevens at 2:47:00 AM
Email ThisBlogThis!Share to TwitterShare to FacebookShare to Pinterest
Labels: Online Resources, Poland