Welcome to New Zealand —
Now, Register or Pay Up!

Now that we've mounted the steep learning curve to prepare for researching those distant DNA cousins who ended up half a world away, I thought I'd test the research waters to see what I could find. Despite access to a genealogy portal with worldwide ambitions—FamilySearch.org—and proudly possessing a World Explorer Membership subscription at Ancestry.com, there is really very little documentation I can access from New Zealand providing me any level of genealogically significant data.

Realizing that, I thought I'd do a little exploring to see what, within the subscriptions I do have, would be of help in my latest foray into New Zealand genealogy. Since my purpose is to trace my husband's Falvey DNA matches back to their origins in County Kerry, Ireland, I thought I'd try a test run in one of the newspaper subscriptions I currently keep.

Long ago, when all I concerned myself with was family history of an American variety, I made a mental note that NewspaperArchive.com included newspapers in their collection from all sorts of unusual places around the world. I mean, how many people do you know who are researching their roots in Kyrgyzstan? And yet, there are editions of Kyrgyzstan newspapers accessible through NewspaperArchive.com.

With a track record like that, surely they would include a humble location down under like New Zealand, right? Thankfully, I guessed correctly. Doing a quick check of their collection, I searched for the surname Falvey, limited the date range, and clicked, "do your thing."

Not really. It said a much more sedate "Search." And I was off and running.

Who knows what I found, but there were several entries for people surnamed Falvey in New Zealand. My next challenge was to guess whether I wanted to find articles published in the North Island or the South Island. Alas, my lack of geographical knowledge hindered me there, despite knowing that this DNA match had ancestors living in Masterton, and another DNA match with roots in Blenheim. So I took a look at a little of everything. And found this: 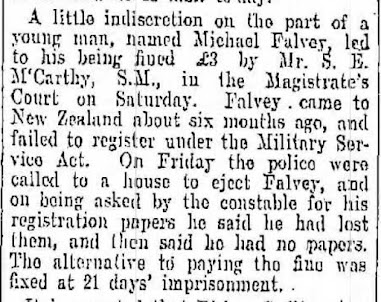 A little indiscretion on the part of a young man, named Michael Falvey, led to his being fined £3 by Mr. S. E. M'Carthy, S.M., in the Magistrate's Court on Saturday. Falvey came to New Zealand about six months ago, and failed to register under the Military Service Act. On Friday the police were called to a house to eject Falvey, and on being asked by the constable for his registration papers he said he had lost them, and then said he had no papers. The alternative to paying the fine was fixed at 21 days' imprisonment.

This is learning-by-osmosis at its finest. What I don't know about New Zealand can fill the volumes in a vast archive. But I'm learning. Whether this is my DNA matches' relative, Michael Falvey, or another hapless immigrant, I can say I've just acquired one new fact about researching my distant cousins in New Zealand: somewhere in all their archives must be a collection of records known as the Military Service Act registration papers. Wouldn't that be a grand resource to be able to access?!

Image above: Excerpt from the April 29, 1918, edition of Wellington's newspaper, The Dominion, under the page four column heading, "Local and General," from the NewspaperArchive.com collection.