When it's Time to Remember


Today is a day to commemorate the sacrifice of those who, in service to their country, gave the supreme sacrifice of their own life. In the United States, where I live, it is a national holiday. Headstones across the country, representing the fallen of our armed services, will be specially marked in remembrance. In some cemeteries, this will be accomplished with much fanfare. In smaller locations, family members will do what they can to decorate headstones, clean grave sites, care for the wear of time on grave markers, and pay their respects.

Though my husband's family has had several members who have served in the military, we have not ever experienced such loss. We do, however, hold a deep respect for those who have, in the line of duty, persevered to the point of losing their own life. Though words and actions, and the sentiments which inspire those tokens, may mean much, they can never bring back those lost lives. The extent of such a finality provides the gravitas due a day like today.

I cannot conceive of the immense burden of being a family member left behind after such a loss. I've seen photos of bereaved spouses and family members, including children too young to even comprehend the loss they suffer; pictures like that tear at the heart. In addition to the fallen family member, they, too, need to be commemorated for the loss they bear—and continue to bear throughout the rest of their lives. 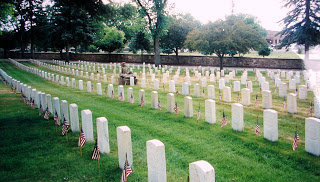