With the holiday sales upon us—Black Friday thankfully behind us, but Cyber Monday unfolding before us right now—it probably has not been lost upon you that you can give the gift of family heritage with the present of a simple DNA test. Not only are the prices right, no matter which company you choose, but the airwaves are saturated with ads boasting promises even the least genealogically astute can grasp.

I, for one, am glad for this heightened awareness of the quest for family history. Anyone who has already participated in DNA testing can welcome the addition of yet more matches with the holiday sales influx. But as many questions as I field from strangers who discover I teach genealogy classes, the great majority of them focus on DNA testing—and reveal the average customer's viewpoint on the process. Hint: that viewpoint is often far afield from a thorough knowledge of what genetic genealogy can offer a customer.

Especially since those holiday sales are prompting heightened interest, it may be time for us to bone up on the reasons why a person might want to buy a DNA test, and what can be expected from such an experience.

While the question I get often seeks a bipolar response—should I or shouldn't I?—I like to reframe the issue and redirect it to the potential customer: just why does that person wish to pursue DNA testing? What does such a customer hope to receive for their effort?

There are a number of divergent reasons why people have pursued the avenue of genetic genealogy. An obvious example of a reason that might not be shared by other customers is that of the adoptee wishing to discover his or her true roots. A similar situation might be that of an African-American, who, despite even knowing his or her parentage and family history for the past one hundred fifty years, then encounters a brick wall almost as unyielding as that of the adopted person.

There are other reasons as well. Some people may have remembered whisperings from their childhood indicating an unsuspected parentage or unusual heritage somewhere in their ancestry, and want to confirm or rule out family stories. Less clandestine yet more commonplace is the reason many people test: they want to see what science can tell them about their ethnicity.

For instance, people who are testing to find matches who can team up with them on their genealogical research—sharing the effort to locate a mystery ancestor, for instance—would do best to seek out the company with the largest database of DNA customers (currently Ancestry DNA). It would also be important to select a company which shares information on matches in the first place—something to consider, at least for the moment, if you are toying with the special claims of Living DNA, which is not yet prepared to provide match information to its customers. And, if this were your DNA testing goal, it would also be smart to select a company whose customers have already identified themselves as willing to be in the game—the ancestor-comparing routine in which the health-report customers at 23andMe aren't necessarily interested in participating.

While holiday sales are always welcome, some DNA customers can find themselves financially involved, more than they intended, and it's good to understand that up front. Adoptees who are really earnest about finding their birth parents understand that they will need to test at each of the current DNA companies—even at sale prices, a price tag that adds up to a significant investment. And those with the goal of knowing the most they can about their deep ancestry, or the roots of their surname, may become involved in the specialized tests for Y-DNA for their patriline, or mitochondrial DNA for their matriline—tests only available at one company, Family Tree DNA.

Since DNA testing prices are at their best right now, I'm thinking it's a good time to review my own reasons for testing, determine whom to test further in my family, and how to go about streamlining the process of sifting through the results. After all, the question of "Why DNA?" may be applicable for first time customers, but it is also a helpful guide when we go back, after the fact, to sort through all the matches that resulted from our initial decision to buy.

After seeing several other bloggers' posts on the subject in the past week (and why not, with all the great sales going on right now?), I've been revamping my own approach in maintaining my match lists, and rethinking some ideas which may seem basic—so basic that we've all forgotten their usefulness as we wade deeper into the process of sorting out all this information. In honor of all these fabulous buying opportunities, I'm taking the week to revisit the issue of expectations and exasperations in the face of my own thousands of unconnected DNA matches. 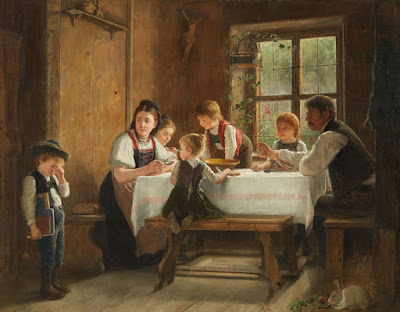 Above: Crying boy at midday meal at the farmhouse; oil on canvas by German artist August Heyn (1837 - 1920); courtesy Wikipedia; in the public domain.