It all ended with "Y" for Y2K. It's a good thing there was no "Z." I really needed to be finished. I suspect you needed it, too.

Projects like a Fall Cleanup can be wearying. The tedious multiple decision points reassert themselves all too often. In the face of indecision, that resolve to steadily advance can strip gears—or at least wear some tread off the tires of progress.

To think that my file cabinet was crammed full of printed copies of twenty year old emails was sobering. Running into a folder still in my possession labeled "Y2K" gives you an idea how badly needed this errand had become.

Granted, much of the information was, at one point, valuable material to people groping blindly in the ether of the newly-minted online genealogical scene. As research opportunities rapidly unfolded over the years, who wanted to stop tap dancing long enough to review—and toss—the already-filed tidbits which might, by then, have become stale-dated. I certainly didn't.

Looking back at this month of re-discovery—hey, I had that in my files?!—drew out some moments to reflect on the vastly changed state of online genealogical research, sure, but it also reminded me of a kinder, more cordial time in which fellow researchers of all stripes, professional or avocational, responded to each other as colleagues pursuing a fascinating mission. It was a time when fellow researchers aired their well-reasoned discussions publicly on the pros and cons of a given theory of ancestry, in the hopes of mutually assisting others pursuing the same family lines.

This month of the Fall Cleanup also reminded me of the friendships forged during that process, and caused me to wonder whether any of those researchers with whom I shared extensive discourses on our mutual ancestors might still be out there. Are they still researching? Did they ever find the answers to the questions that frustrated their progress? I'm tempted to try and contact some of them and see if there is a twenty-years-afterwards story to be found. After all, these were—and still are, hopefully—all distant cousins. Sadly, I already know some of the seniors whom I wrote back then are no longer here. But for those of us who were then young moms juggling home life (and possibly a simultaneous career) while pursuing our genealogical passions, there is a chance that we can still reconnect.

There is, of course, more work to do on my file cabinet. Yes, I cleared out the bottom drawer and then conquered the top drawer full of genealogical treasures, but there are two other drawers filled with material yet to be vanquished. Those two drawers, however, belong to different compartments of life—slices of life outside the realm of genealogy, where I put on such masks as home educator or nonprofit organization newsletter editor. No role was as satisfying as the one which was my first childhood call and most lasting heart's desire: to preserve the stories of the family members who've gone on before me.

I suspect routing those other two drawers won't be as taxing as the ordeal of the last month. While there might have been some sentimental attachment to a first newsletter published for a fledgling organization, that comes in a distant second to the passion of family history; it will be easy to chuck what needs to be tossed there. I won't feel the need to talk about it, pine over the times long gone, or mourn the passing of a connection, so don't expect a blow-by-blow report on progress.

Eventually, I'll face the need to make decisions about what to back-fill in the spaces now liberated from their twenty-year-long burden. I have more genealogical files in storage which need to see the light of day—and face their day in "court." But I doubt I'll either substitute one set of files for another or create a whole new stash with the research I accomplish in the future. Times are changing and the research methods of the early twenty first century are already a far cry from those of the 1990s—who's to say how things will change in the next twenty years? I certainly won't want to create the next era's monster mess.

Looking back, it was probably a good experience to go through all these files. From nostalgia to exhaustion to sheer grit, the month evoked a wide range of emotions—but these were all feelings that probably should have been dealt with about fifteen years earlier than they were, if I weren't so busy living the life I led back then. There is always something to face, however, and there is no time like the present to get a job done. I guess this October was just the time for me to do it. 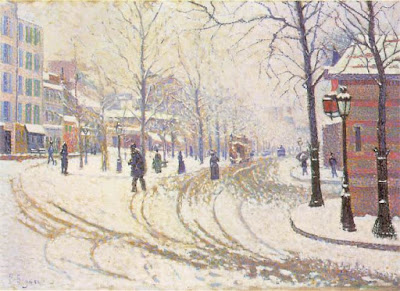 Above: "Boulevard Clichy in the Snow," 1886 oil on canvas by French Impressionist Paul Signac; courtesy Wikipedia; in the public domain.
© Copyright 2011 – 2022 by Jacqi Stevens at 2:42:00 AM
Email ThisBlogThis!Share to TwitterShare to FacebookShare to Pinterest
Labels: Organization