The Danger of Resurrecting Old Files

So, here I am, intending to pursue an old family line I haven’t researched in a while. It’s a useful line, because it may very well serve as a vehicle to make an end run around my brick wall Flanagan line. I’ve already accumulated several digital documents of birth and death certificates in which the unwitting Cook County clerk included the actual county of origin—County Limerick—instead of just recording the requisite name of the foreign country.

The only drawback: many of the first details I found were discovered pre-Internet. Where, oh where did I put all those papers?

I groan to think I will have to unearth boxes packed away for storage—long since out of sight and out of mind. This will pre-date two filing systems—notebooks and file cabinets—and bring me back to the realm of “file this” post-it notes and other extraneous scribblings.

What I have been able to retrieve so far

My target person and starting point for this new foray into Irish research is Johanna Flanagan Lee. She was born approximately March of 1849 in County Limerick, Ireland, and somehow followed her fellow family members who immigrated to Chicago, Cook County, in the United States.

Johanna was married to John T. Lee—a horrible misfortune of a choice, from a retrospective genealogical point of view—sometime before the birth of their first child, William, who arrived in 1875 after the couple took up residence in Chicago. A second research disaster was the date of Johanna's death—in 1909, just before the reach of state documentation of such research essentials as names of parents.

However, quite a few of the children of Johanna and John were well documented in Chicago birth records, showing me everything from John’s occupational status—cooper—to Johanna’s maiden name. That’s why I’m certain of that Flanagan link.

What I think I remember correctly

The sticky part, in reconstructing this line, is in linking Johanna to our Flanagan folks. If you have been following along here at A Family Tapestry for a good length of time, you may remember my series on Agnes Tully Stevens, daughter of Chicago policeman, John Tully and his wife, Catherine Malloy Tully.

Agnes’ mother, over the years, played dutiful niece to an ailing uncle, William Flanagan, brother to Agnes’ maternal grandmother, Anna Flanagan Malloy. Of course, in records of that era, spelling was a wild card that couldn’t be counted upon, so research involves several permutations of spelling for both Malloy and Flanagan—inserting just the right touch of uncertainty as to make things frustrating. However, when I found the funeral notice in the Chicago Tribune following the date of our William’s death, I felt pretty certain I had located the right one:

William, a single man with no descendants, provided a handsome monument to designate his burial place at Mount Olivet Cemetery, just outside the city limits of Chicago. I’ve mentioned this monument before. After one trip to Chicago, I contacted the cemetery office to see about the possibility that, though he was a single man, his burial was in what is called a family plot.

If I remember correctly, his was a family plot. I gleaned the names of a few others buried with him. Though I still struggle to make some of the connections, I remember one of the people named was Johanna Lee—thankfully, as her death pre-dated the advent of the kind of state sanctioned information gathering that gladdens the heart of genealogical researchers.

Somewhere—and “somewhere” is the key—I have a document identifying both Johanna Lee and Catherine Tully as nieces of William Flanagan. Of course, now that I’m seeking it, I can’t find it. My work on this line was done so long ago, I’m afraid it is locked within old computer files run on formats or programs no longer operative. There are some files I can no longer open—files sent to me by wonderfully accommodating workers at cemeteries far, far away from my home. Unless I find a way to open these files, or get my hands on filed-away printed copies of those records, it will mean having to start from square one in replicating my discoveries.

Without that “smoking gun,” I now lack the evidence to verify my conclusion that Johanna Lee is part of our Flanagan line. I’ll surely drag it out of storage somehow, as it may be the only source providing that connection. In the course of doing so, perhaps some serendipitous other discoveries from beyond the great digitizing divide will help fill in more blanks and move my research progress along.

Until then, with tomorrow’s post, we’ll move ahead and examine what has been found about Johanna and her family, eventually—hopefully—identifying her parentage somewhere back in County Limerick, Ireland. 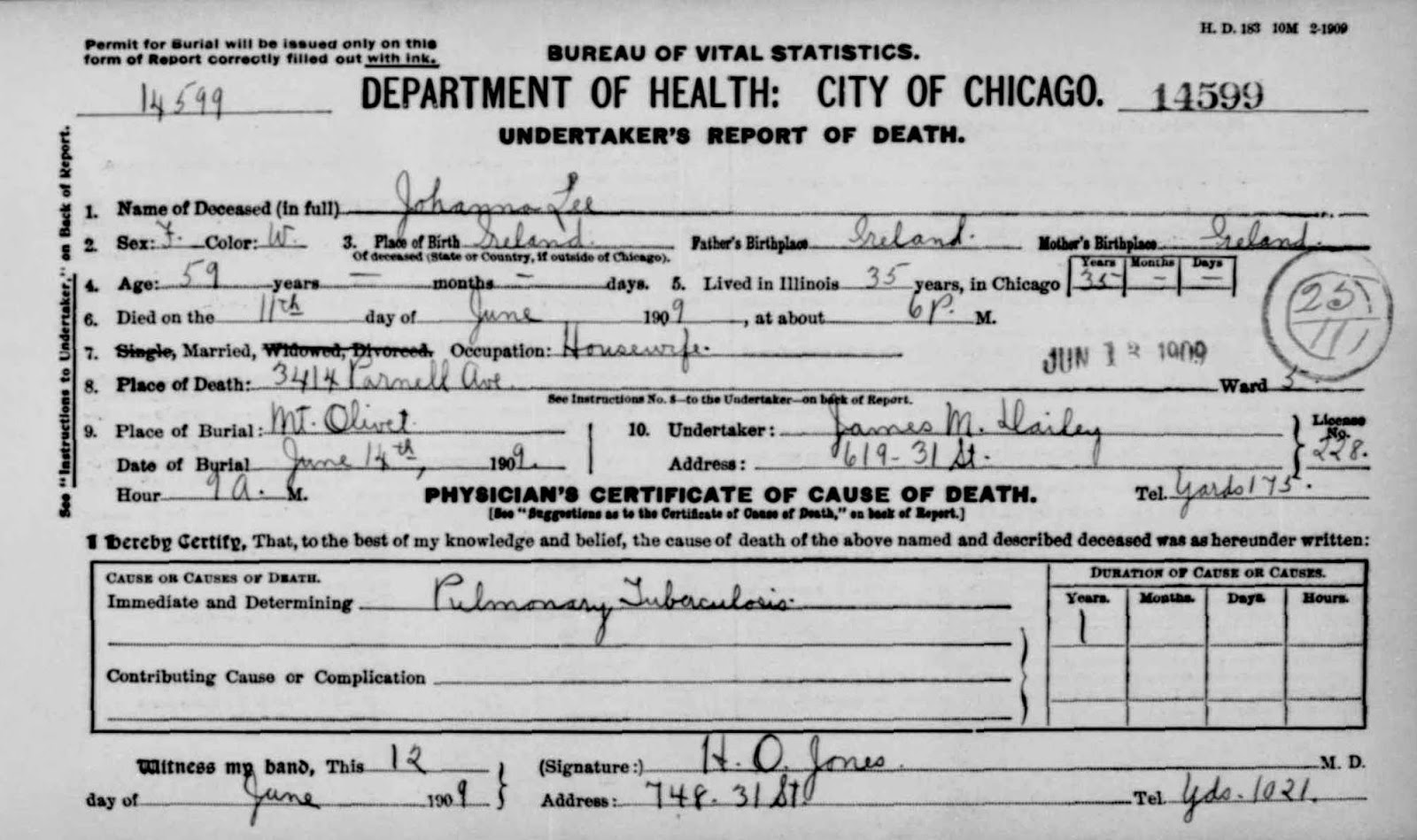