C’mon, cousins—don’t you ever Google yourself?!

It’s been grand, spending New Year’s day trawling around the Internet—and particularly to my favorite bloggers’ sites—to read everyone’s Year-In-Review entries. Granted, there’s been a lot of bragging out there, and well there may be, among those diligent about keeping up on their genealogical research.

Last night, I saw Smadar Belkind mention her blog’s second anniversary. Just before she listed her top ten posts for 2013, I saw it: the coveted mention of how Past-Present-Future enabled her to connect with “long lost cousins.”

Then, as if it were nothing to hit a blogger when she’s down, my very next stop in the night’s reading finished off that one-two punch nicely. It was Debi Austen at Who Knew? matter-of-factly mentioning, “About eighteen months ago I connected with a Steen descendant, thanks to my blog….” That wasn’t all, though. Rattling off her “top ten” finds for 2013, she happened to slip in a second hit: “I found another cousin.”

Granted, I come from a small family. I shouldn’t expect such serendipity. It’s obviously a matter of a numbers game. And numbers I don’t have.

But this good genealogical karma must be happening to a lot of people—even the ones who come from small families. (After all, every time you push back another generation, you double the number of ancestors you are researching; it isn’t a matter of small, it’s only a matter of too close to the present, right?)

Wondering how often the Cousin Bait Fairy flits by those of us, hunkered down in deep concentration over our research projects, to bop us on the noggin with Cousin Dust, I Googled the term on Thomas MacEntee’s internal blog search at Geneabloggers. Apparently, there were hundreds of bloggers with such good fortune, judging from the ten pages of results that popped up for my search term, “cousin bait.”

I’m not much for fishing, but I have heard the saying, “Fish or cut bait.” I’ve been doing a lot of fishing out there in those genealogical waters, but not catching much. Perhaps it’s time to set aside the tackle and go cut bait…

Is that what you do when your Cousin Bait is not working? 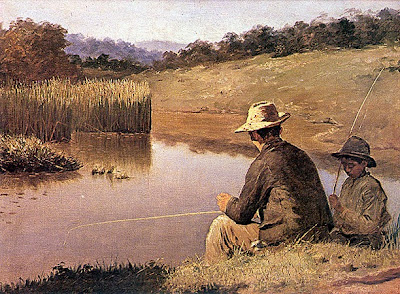 Above: Oil on canvas, "Fishing," by Brazilian artist, José Ferraz de Almeida Júnior; courtesy Wikipedia; in the public domain.
© Copyright 2011 – 2022 by Jacqi Stevens at 2:49:00 AM
Email ThisBlogThis!Share to TwitterShare to FacebookShare to Pinterest
Labels: A Process Break, Blog Recommendations