Letting the Newspapers Tell the Story

When a newspaper story provides an unexpected detail about a family member’s history, sometimes there is no recourse but to seek further newspaper reports to fill in the story’s blanks. That was the case with Leon S. Bean’s 1928 obituary, which we questioned yesterday.

The trouble with stumbling upon family history details dated in the middle of a decade is just that: it’s a long way until the next census. Searching city directories might sometimes help to fill in the blanks for a year like 1928, but can often be spotty—especially if a person has just moved to the area, or there is no directory published, or currently existent, for the town in question.

In the case of Samuel Bean—the blind and deaf son of Leon Bean, mentioned in that 1928 obituary—the town of residence was listed as Boston. As luck would have it, the 1928 city directory for the City of Boston is available online at Ancestry.com, so I took a look there.

Granted, the obituary for his father was written in November of the year, so perhaps Sam had arrived in that city before November, but after the directory was published. Perhaps the 1929 directory would help?

Of course, often folks living in outlying towns refer to their geographic location by the name of the metropolis rather than the relatively unknown village’s name. However, I’m not sure I’m willing to do an in-depth study of all the population centers near Boston in hopes of finding someone with a surname as common as Bean.

There is another approach I can use, though. At least this is the one I will try for now. Since Sam seemed to be a community favorite in the Berkeley area during his tenure at the California School for the Blind and Deaf, there are many more newspaper articles I can access.

Some of those reports are barely mentions of his name, nothing more. Others provide a bit of color about his personality or current challenges at school. I’ll start with the more substantial news reports and work my way through those first.

One, for instance, that I found on a recent research trip to Sam’s native Redwood City, mentions some details about his marriage to Maud Woodworth. While it predates Leon’s obituary by several years, it is a sufficient starting place right now, in our quest to figure out more about this unique student.

As I’ve mentioned before about the Schellens Collection transcriptions, the difficulty with this secondary source is the transcriber’s use of ellipses. I will, at some point, need to access the source for the transcription and see if that original newspaper article included more details germane to our purposes.

In the meantime, it will suffice to add this bit of information from the Redwood City, California, Standard, published on January 13, 1921:

Samuel W. Bean, well known deaf and blind poet and former Redwood City boy, was married last Friday in Berkeley to Miss Maud M. Woodworth of Irwindale, Los Angeles county. Mrs. Bean was an instructor in the California School for the Deaf and Blind at Berkeley when Bean was a student there and was his teacher for two years before he graduated in 1919. She laughingly said, following the wedding, that she had elected herself to be his permanent guide for life, taking the place of Fred Streiff, a close friend and constant companion during the time when the blind and deaf poet was selling his poems among booksellers. Mrs. Bean became interested in teaching the blind when she was a girl on the orange grove of her father, who is also blind and with whom she was a steady companion for many years. She came to Berkeley a little over two years ago and entered the blind and deaf school as a teacher.... Bean was sixteen years old at the time of being struck with a baseball at Palo Alto which rendered him unable to hear or see.... His purpose, Bean says, is to sell his poems through booksellers and gather sufficient funds to culminate the ambition of his life, the opening and operating of a broom factory to be run entirely by the blind.... 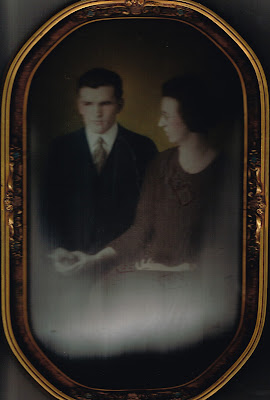 Photograph above: Samuel W. Bean and his wife, the former Maud M. Woodworth. Undated portrait, most likely from the 1920s, now in the possession of the author.
© Copyright 2011 – 2022 by Jacqi Stevens at 2:50:00 AM
Email ThisBlogThis!Share to TwitterShare to FacebookShare to Pinterest
Labels: Bean, California, Newspaper Clippings, Weddings, Woodworth