Having a Genealogy Angel to walk me through the application process for what, in my mind, is a daunting project—acceptance into the lineage society, Daughters of the American Revolution—is a blessing. Getting to meet with said Genealogy Angel over a cup of coffee is heaven-sent.

That’s the way I spent my morning yesterday. Thankfully, my Genealogy Angel is officially appointed to do just that: assist people through the process of dotting all the Is and crossing all the Ts of the paper chain that reaches back from my life to that of a patriot in our country’s war for independence.

I’m learning a lot in the process.

For one thing, I’ve learned that there are some details of my grandmother’s life that I never knew. Facts that perhaps her own daughters never knew. Sometimes it’s uncomfortable to stumble across those details. Sometimes it leads to the realization, “That explains everything,” as another researcher recently observed.

I’m also experiencing a process where these relatives-on-paper are taking on a three dimensional aura like I’ve never noticed before. I’m learning their stories. Learning how to see each one as an individual. Above all, learning to see each name as more than a collection of vital statistics. My ancestors are becoming real people to me.

That is not necessarily an easy task. It takes work finding some of these details. True, the D.A.R. application requires verification of those vital statistics. But in the journey back through time—my time—I’m choosing to adorn those vital dates with as much detail as I can add to the picture. You know me: I need a story to go with those names! 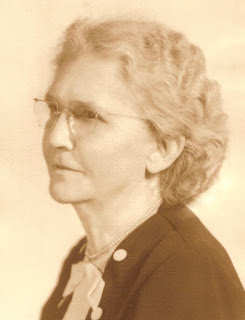 While my maternal grandmother—the Rubie of the last few days’ posts—is still an enigma to me, her mother is starting to come to life through what I’m uncovering. She—the Sarah Ann Broyles of “Jonesboro” in Tennessee who somehow met and eventually married Florida dentist Rupert Charles McClellan—was a relative I never met. Yet, her photograph has been in my life because she was my mother’s beloved grandmother. Through my mother’s stories, her grandmother came to life for me, and ever since my own childhood, those stories allowed me to see much more than just the face in the photograph.

Reconstructing her through the paper trail is only part of the journey, but it is a necessary step. I can find Sarah Ann Broyles in the 1898 record of her marriage in her hometown in Washington County, Tennessee. I can see her tentative first years of marriage—not in her hometown, not in her husband’s, either—in the first census after she married Rupert McClellan. With his name mangled for the 1900 record as “Robert,” he and his young family had settled in Virginia—but not for long.

Within ten years, he had returned to his home state with his family in tow—not to the homestead of his parents, but a new life for his family and his profession in Fort Meade, Polk County. (Not, however, without having his given name, once again, misrepresented for the record.) And finally, with the 1930 census, choosing to move once again—this time to Tampa, where Rupert and Sarah Ann remained for the rest of their lives.

I find—thanks to a Find a Grave volunteer—photographs of the McClellan grave at the Myrtle Hill Memorial Park in Tampa, the final resting place for Rupert in 1943, and Sarah Ann in 1950. While I have yet to locate any obituaries for them, there is enough of a framework of their life’s stories to help sketch in the details.

And, oh, so much more I want to know than those details that will connect me with a membership in a society that confirms my American heritage. The process of the D.A.R. application, really, serves as the backbone supporting my own quest to delve into the essence of these lives.

I want to know the little details. Really, I want to ask Sarah Ann Broyles so many questions. “How did you meet your future husband? What made you decide to move so far from home? How was life different for you in your new home? Why did you pick the names you chose for your children?”

The list goes on and on. And I may never know the answers. But I know one thing: without asking any questions, I could never begin to make any discoveries.

And, once I’ve begun making those discoveries, I could certainly use a Genealogy Angel to help light the paperwork trail for me.

And a cup of coffee can come in handy in the process.

© Copyright 2011 – 2022 by Jacqi Stevens at 2:40:00 AM
Email ThisBlogThis!Share to TwitterShare to FacebookShare to Pinterest
Labels: Broyles, Florida, McClellan, Tennessee, Weddings