The Grandmother of Genealogy Portals 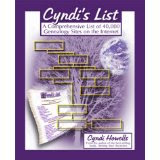 “Free” is everybody’s favorite word. When it comes to online research, however, “free” may come with caveats. One of them is: you have to find it yourself.

If you know about Cyndi’s List, though, you have found a friend in the search. Since 1996, Cyndi Howells has been aggregating links to the virtually hundreds of thousands of websites and online resources featuring aspects of genealogy large and small. Cyndi, online, is a good person to know.
Cyndi’s List began, literally, as a list. A one-page photocopy of everything genealogically useful that she had found on the web, it was a hand-out she had brought to a meeting of her local Genealogical Society. That was in September, 1995. By the time six months had passed, she had taught herself HTML and built a personal web site to share her by-now thousand-plus links. Since then, it has mushroomed as the idea caught on and people everywhere began sending her suggestions to more links.
The idea seems larger than life: the virtual Big Box of Genealogy Sites. Looking through the categories can seem overwhelming, especially for the new researcher. A recent reorganization of the website helps, but still reminds you that you are on to something BIG.
The huge list of categories—think Wish List for Santa’s Toy Shoppe—was best reassembled into pages of subcategories. A look at the original version, an alphabetical splat of everything there is to know about everything genealogical, gives you an idea of the immenseness of what is Out There. And these are just the categories. Each topic produces a sizeable list of its own at the bidding of your mere click of the mouse.
Sub-category lists help. If you already know what you are looking for, a clickable alphabet at the bottom of the home page streamlines the process of getting in the door. There is a page of “How To” categories. For newbies, there is a separate page of “How To” categories specific to beginner research issues.  If you want to know more about the process behind all the content, there are pages of categories about FAQ topics. And there is even a page about who this mysterious online Cyndi really is.
There are enough categories to fuel over 650 pages of lists of clickable genealogy sites. Want to research your family history in Slovakia? It’s there. Wondering if there is royal blood in your family line? Check here. There is even an entry for Antarctica, in case your forebears headed that far south for the winter. And, not to leave any research possibility untouched, the List also has a category for Outer Space. Pretty thorough.
Cyndi’s List—and its creator—has been featured in Newsweek, The Wall Street Journal, Time Magazine, USA Today, Parade, Wired, The New York Times, and numerous other publications over the years. Cyndi’s List has a page on Facebook. She also maintains a blog. Don't forget Cyndi's List: the book. And yes, there is even an entry for her website on Wikipedia.
Cyndi’s List is a genealogy playground big enough to need its own map. Don’t let the immense size scare you away, though. There’s plenty of room to roam. Come on down and take a look around.
Howdy. And welcome to the Texas of genealogy research.
© Copyright 2011 – 2022 by Jacqi Stevens at 2:49:00 AM
Email ThisBlogThis!Share to TwitterShare to FacebookShare to Pinterest
Labels: Books, Online Resources, Tools for Beginners