Figuring Out Those Flanagans 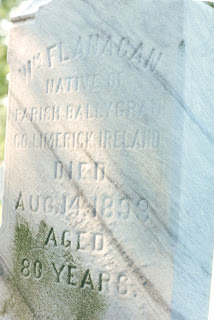 So what about William Flanagan, Irishman, who got himself a very round trip from his homeland to Illinois via the far side of the world in Australia? It had been a long time since I checked online for more pieces on my Flanagan puzzle, so I decided to take a look. After all, aging means mellowing, as far as internet resources go.

However, William himself yielded little information. He was a single man. I only know from indirect references that he was related to my husband’s Tully line. But because the Tully line was one of my “brick walls,” I had hoped to use him as a way to do an end run around that black hole in the online data world.
It didn’t work. Single men who have been well thought of in the world may leave little behind in the way of family links. There was this one other hint, though....
Somewhere in all those stacks of unfiled research papers in my office was a document showing that, besides my husband’s great-grandmother Catherine, William had one more niece. Her name was Johanna Lee. She was buried in the same cemetery plot as William, along with some other people who seemed to have family connections.
At first, I didn’t know if Johanna was a relative or not. In the 1800s, it was customary in some places for a man to purchase a cemetery lot big enough to accommodate his entire family. For this reason, one research trick was to obtain the names of everyone buried in the lot. I make that my habit, but on more than one occasion have had to discard some of the names in the records because, try as I might, I can find no familial link. 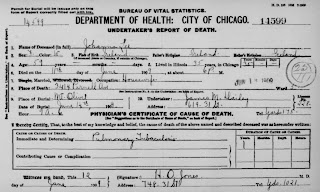 Years ago, I had sent for Johanna’s death certificate, hoping it would reveal her maiden name. Unfortunately, she died just before the city of Chicago—her adopted home—instituted the policy of gathering the wealth of personal information we come to expect in more modern documents. Nowadays, death records provide the name and birthplace of each parent, as well as the deceased woman’s maiden name. I would have been satisfied with just the maiden name.
By claiming William Flanagan as her uncle, Johanna could either be descended from William’s (as yet unknown) brother or a sister. If sister, then another surname would enter into the picture—and without it, searching would become slightly more complicated. Why, oh why, I thought, couldn’t the City of Chicago have made their decision to modernize their records a few years earlier? It would have made life in the research world so much easier for me.
But there is more than one way to corroborate a fact. And thankfully, as people increasingly use the internet as their historical repository—and allow it to be freely accessible to all—we are able to easily locate documents that used to take hours of hand searching to uncover.
And yesterday afternoon was my time to find them.
It wasn’t difficult at all. Once I got on a roll, it actually was hard to stop looking. I kept finding so many more documents. I’m now well on the way to constructing a descendant chart of Johanna's family.
Finding the surname “Lee” in a city the size of Chicago can be a daunting task. Think of the implications: Lee is a surname claimed by multiple ethnic backgrounds—from Germany to Greece to Ireland to China! Lee is also not an uncommon name. A wide-open search for just the plain surname Lee with no secondary terms can yield truckloads of records. Thank God for the power of internet search tools!
The way I found it was this: I went to the beta site of Family Search labs. Using the advanced search option, I played around with the surname Lee and the given name Johanna. I used the delimiter of Chicago to avoid getting extraneous hits. However, due to 19th century proclivity to spell creatively, I used the option to find “exact and close match.” That way, the many renderings of Johanna and, believe it or not, Lee, would all be captured—not to mention, as I continued looking, Flanagan!
Right off the bat, I found several birth records listing a Johanna Flanagan as mother and John Lee as father. As some of those records were for as-yet unnamed sons, I then searched using advanced options where I entered Johanna and John as parents, to see if any other records—census or death—would come up with those children’s given names. I did get a few, enough to reach to Johanna’s grandchildren, and add daughters-in-law’s maiden names to the record. With time, I’ll be able to connect a few more dots in that family tree.
I then checked some of those children’s names using the Rootsweb WorldConnect files. Thankfully, someone else from that line—undoubtedly an “outlaw”—has posted a tree from one of the wives’ lines. I’m glad the contributor provided her contact information. In reaching her, I now know that she also has her data posted on Ancestry and that she has updated some of it since her upload to Rootsweb. We’ll be able to work together on that line, speeding things up for both of us.
As far as Johanna’s uncle William goes, though, I haven’t yet secured that tidbit of information, that secret weapon to blast a hole wide open in the Tully-Flanagan brick wall. However, that key ingredient may be something as simple as the next step of discovering Johanna’s father’s name—and sincerely hoping that that Flanagan left a more obvious trail of his whereabouts for his descendants to find.
© Copyright 2011 – 2022 by Jacqi Stevens at 3:06:00 AM
Email ThisBlogThis!Share to TwitterShare to FacebookShare to Pinterest
Labels: Chicago, Flanagan, Online Resources