Finding resemblances in the family photos from previous generations may be the one process which has enticed many into the pursuit of their family history. Think of every expectant couple, now proud parents of a newborn, with whom relatives share baby pictures of the previous generation with comments on how junior's eyes look like grandpa's—how often has that scenario repeated itself?

After posting a month of research articles on the family linked with the rescued photographs of Marilyn Sowle Bean, I couldn't just abandon the topic without sharing a few more from her collection (which I'll continue to do on weekends this month, as well).

Pulling out the one I chose for today's post, I found myself enticed into that same tendency of spotting recognizable features. Only this time, it wasn't so much a facial feature or a single trait I spotted, as much as a reaction to the overall impact of seeing the photograph.

The picture itself was tiny, what we'd now call a wallet-sized photograph. The label on the reverse, while helpful in providing the date—1931—left only the inked message, "Dad and Mother, Hollywood, Cal." In a similar hand, someone else had penciled in, "G'ma + G'pa Sowle."

Ah, the surname. Now, that is helpful—but which Sowle? It is hard to determine the perspective of the person labeling the photograph, when I can't figure out just who did the writing—Marilyn? Or her mother?

Judging by the appearance of the two people in the picture, the photograph couldn't have represented Marilyn's own parents, David and Olive Brague Sowle, for 1931 would have been only three years after Marilyn's own birth. Marilyn's paternal grandparents, Joe and Dora Sowle, might have followed their son to California that early—or perhaps they were just visiting their son's new home. 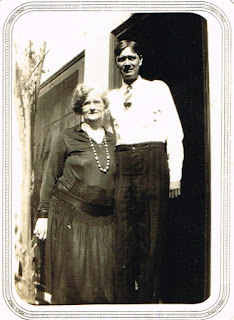 Wherever they were posing for their picture, I wish I could tell on account of just one detail: the extreme difference in their height. But then it struck me: if Joseph Leslie Sowle was as tall and lanky as that photo made him out to be, I am no longer surprised that tiny Marilyn chose for herself a mate as tall and slender as her own husband turned out to be.

Years ago, I had shared the photo of newlyweds Marilyn and Earle Bean, an impromptu shot composed as a joking commentary on the disparity of their relative height. But seeing the photo of an aging Joe and Dora Sowle—if that is indeed who they were—with Joe towering over his wife, makes me wonder whether that image was imprinted on Marilyn's young mind. Sometimes in life, we tend to move toward the familiar scenarios from our past, as if in hopes of replicating that in our own generation. Marilyn certainly did. 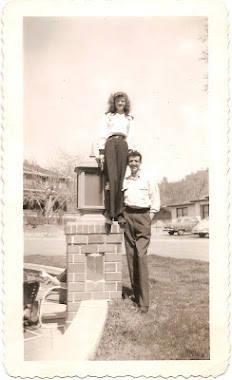 Photographs: Above, 1931 picture of Dora Moore and Joseph Leslie Sowle in Hollywood, California; Below, Marilyn Sowle and Earle Raymond Bean at unidentified location after their 1948 wedding; both pictures currently in possession of author.