Identity of a Woman in the Background

It is so helpful when family members share in the effort to piece together a family history puzzle. One of the older siblings might have memories from childhood not previously shared with any of the younger family members. A cousin might have inherited special family photos. Sometimes, the full story of generations past only comes to light when each descendant shares the sliver of the composite picture that fell his lot to receive.

So it is, now, with our process to discover "Mary"—the one found in the 1910 census who once was called Marianna Laskowska. As I go back through the few old photos shared with me from one of my older cousins and my oldest sister, I begin to wonder about a tiny, frail woman who seemed only to appear in the background. In one photo from my sister's collection, she was drawn outside into the daylight, standing in a grouping with my grandmother, my aunt, and two other people I didn't recognize. In another photo, sitting indoors on what looked like a wheelchair, she was seen cradling what looked like a doll. Was this Mary?

Arriving in New York City from the port of Hamburg, Germany, in 1889, Mary was not quite thirty six years of age. Traveling with her three young children, they had left their home in Żerków, a small village in the western portion of what is now Poland. It is doubtful that Mary spoke anything other than her native tongue, a detail we can verify with a brief glance at the 1920 census. While that same enumeration revealed that, once her family was grown and gone, Mary did take a job outside the home as an "operator" at a shirt factory, chances might have been good that she would have needed little English to carry on her duties there in the heart of Brooklyn.

Perhaps it is little wonder that in her later years, Mary seemed to recede into the shadows. When I pull out the few pictures I have of the Laskowski family and see that unnamed woman in the background, I still wonder, was that Mary? Unless I am able to find an as-yet unknown distant cousin who knows the identity of these unknown connections to my paternal grandmother's family, there are not many people left from that generation to fill in the answer to that question. 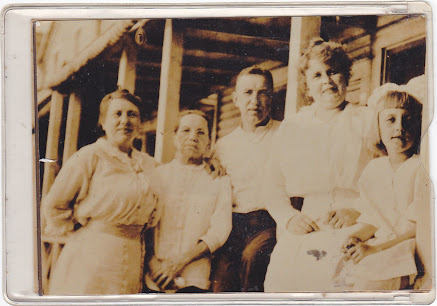 Above: Photograph from the collection of a now-gone relative, including two unnamed people plus my grandmother Sophie and her daughter Anna on the right; could the woman second from the left have been Mary?