The Falvey Family in Massachusetts

Irish immigration to America has been a story which spans the entire timeline of our nation's history. Yet, there have been certain time periods in which that particular ethnicity bulged in proportion to arrivals from other countries. The years of the Great Famine, in particular, brought well over one million Irish immigrants to our eastern shores. While it is understandable to see why they left their homeland, there were also compelling reasons for their arrival here. Although many were refugees from the rural areas of Ireland and thus poor, unskilled laborers, the attraction of larger cities impelled gatherings of Irish in places like Boston. In a city setting, immigrants could gather to form their own neighborhoods and thus establish a supportive network among themselves.

There was a second factor attracting the Irish to America: the diversity of job opportunities calling for unskilled laborers. Projects throughout our nation's history from the Erie Canal to the building of transcontinental railroads relied, over the decades, on the efforts of immigrants such as the Irish. Massachusetts, in particular, benefited from laborers in their many manufacturing endeavors.

Such was the case with one town in western Massachusetts where we find the ancestors of two Falvey descendants who happen to be DNA matches with my husband—possible relatives of my husband's second great-grandmother, Johanna Falvey. The town, Chicopee, near Springfield, eventually claimed eight industrial giants situated on the Chicopee River whose businesses boasted international reach.

It was the cotton mills in which some of these Falvey relatives once labored, remaining from their earliest working days until their last. As it turns out, tracing the family trees of these two DNA matches back to their Falvey roots and the immigrants who left County Kerry for America, show us that there were at least three Falvey siblings who came to Chicopee. One DNA match descends from a brother, the other from one of two sisters.

Fortunately, records throughout Massachusetts' history being what they are, it has been quite possible to trace these Falvey immigrants, once they arrived in Chicopee. We'll take some time this week to get to know all three of these Falvey siblings while outlining a family tree of their descendants. After all, for those accustomed to tracing genealogical records, the most helpful way is to actually sketch out those relationships through a pedigree chart. And we'll do just that in our introduction to Mark, Bridget, and Johanna Falvey of Chicopee, Massachusetts. 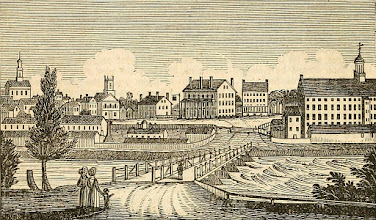 Above: 1844 engraving of the manufacturing center called Cabotville, once part of Springfield, which in 1848 became part of the new town of Chicopee, Massachusetts. Image courtesy Wikipedia; in the public domain.