If I had seen what I've just found of a past census record before participating in my own most recent census enumeration, I think I would have gotten down on my knees and thanked the enumerator for doing a conscientious, careful job of noting my entries. My descendants may be depending on it.

As it is, I did make progress, in the current research project, in finding out more about Charles Sullivan in Toledo. Not long before his wife's untimely death due to complications of childbirth, Charles had filed his Declaration of Intention to become a citizen of the United States. He filed the document in the Court of Common Pleas in Lucas County, Ohio, where he had settled with his wife and children in Toledo.

From that document, we learned a few details about Charles—although, unfortunately, nothing about his parents. Those few details were enough to confirm that we were, indeed, looking at a report about the right Charles Sullivan—an important detail, considering the prevalence of a name like his.

For one thing, he reported his birth as occurring on May 1, 1882, in Stratford, England. We learned that he stood five feet, seven inches tall, with blue eyes and dark brown hair—and even that he was "tattood" on his "left rist."

Charles traveled with his wife Alice—another gratefully-received hint that we are on the right track—and children aboard the RMS Adriatic, arriving in New York City about the tenth day of December, 1920. From there, he and his family traveled to Ohio to settle with Alice's siblings and Sullivan aunts at 324 Saint Mary's Street, the very house where Alice soon gave birth to a stillborn son before losing her own life.

But what about their story, back in Stratford? Wouldn't you like to know more? I sure would. Yet, even though I can find them in the 1911 census, the opportunity to discover one of the key points I was seeking was doomed to slip through my very fingers. Notice the category in the 1911 census for England and Wales with these specific instructions: "Birthplace of every person. (1) If born in the United Kingdom, write the name of the County, and Town or Parish." 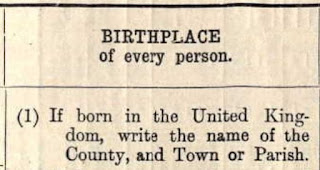 Now, wouldn't you like to know that about your own British Isles ancestors? That was precisely what I was seeking, not only for Charles, but especially for his wife, Alice. But do you think the census enumerator was able to follow those straightforward instructions for Charles (line one), his wife Alice (next line) and their young son Charlie? The answer: 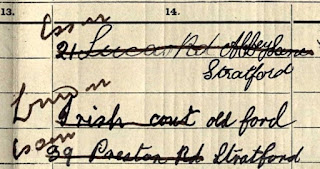