On the Streets Where we Live


Not many people give much thought to how the street where they live received its name. While some street names—notably those in sanitized suburban settings—may reflect the unimaginative sameness of tree-themed names, there are some street signs revealing a glimpse into a road's history.

Curious about the name of a major road near me, after discovering that the farmland once adjacent to what is now a city street bore the same name, I've tried to find sources to confirm any connection. Though I can find a biographical sketch touting the many civic contributions of that property owner, there is no mention of just how the street passing by his property managed to acquire the very same name as this man's surname.

Other cities have street names which reveal a glimpse into their history. I tried my hand at a search at GenealogyBank, repository of many archived newspapers, to see if anyone wrote an article about such a topic. Sure enough, there were a few choices. One writer expounded upon the "history and significance" of street names in South Trenton, New Jersey, for the Trenton Evening Times in a Sunday article on October 12, 1913. For some strange reason, the Portland newspaper, The Oregonian, ran a column called "Origin of Street Names" on April 14, 1900—only it was about the history of street names in New York City.

Delving into a theme I brought up yesterday, the Encyclopedia of Chicago explained the challenges behind coordinating street names in a city which, as it expanded, swallowed up smaller towns in its perimeter, resulting in several different streets sporting the same name, but different locations. For those hoping the fire department arrived before their house burned down, this would understandably cause some consternation, which city fathers hoped to rectify.

This, of course, brings up another challenge to finding the story about one's street name: street names have changed, over the years. In searching for how Hutchins Street got its name in Lodi, California, I ran across a Sanborn Fire Insurance Map of the downtown area from 1895, which provides an example in its "County Road" label for one particular street. Today, residents would recognize that street as Lodi Avenue. Very possibly, the road past the Hutchins property may at one point had a generic designation much the same as this.

Working with other researchers attempting to discover more about the area where their ancestors lived, I have been made aware of other streets in our county which have been called by names other than what we call them today. Between that challenge, plus the re-numbering of house addresses in the early 1900s in many cities in the United States, inquiries into the history of the street where our ancestors once lived can encounter many twists and turns—even concerning some of the major routes of our cities. Whether these are causes concealing the elusive reason for the naming of Hutchins Street in Lodi, I can't yet tell. 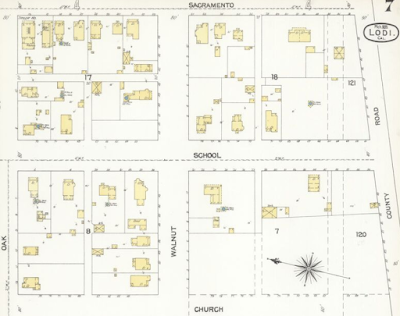 Email ThisBlogThis!Share to TwitterShare to FacebookShare to Pinterest
Labels: California, Hutchins, Roads and Their History