While I've been struggling to identify the members of Alta Barnes' grandparents' generation—in hopes of identifying just who those tall cousins were flanking Alta's mom, Clara, on that fifth orphaned photograph I found in northern California—I've been stalling for a second reason: the photograph itself is too faded to see well.

All that tap dancing around Clara's parents' family trees have been of no use. It made more sense to me that Clara would be standing with cousins from her mother's side of the family, but no one else on Harriet Hagar's side of the family had children—at least that I could tell.

Harriet's siblings—Lucy, Henry, and Charity—weren't that easy to trace, themselves. I could find the oldest three children as part of the Hagar family in Kansas as recently as the state's 1865 census, taken in June of that year. The baby of the family, Charity, arrived that September, thus missing the official record by a matter of only a few months.

September likely was the last anyone would see of Charity's mom—also named Charity—and I suspect she died during or right after the baby was born. The reason I suspect that is because, after that point, I can find the other children scattered about in other homes, but not with their parents. Their brother Henry—at least if I have the right one—was listed in a family by a different surname until joining his by-then-married oldest sister, Harriet, in the Tousley home in time for the 1880 census. Likewise for baby Charity.

Lucy, on the other hand, seemed to have disappeared entirely—perhaps succumbing to an illness which might also have taken her mom, or by marrying and forever disguising her maiden name so thoroughly as to never be found again. Who knows? Perhaps in her married years, she was the source of the mysterious cousins, though I doubt it at this point.

Youngest sibling Charity also couldn't have been the source of the unnamed cousins, as we've already discovered in pursuing the events in her life through the local newspaper reports.

Yet someone apparently knew who those mystery cousins were, for the faded photograph—though undated, possibly taken as early as 1893, the year of Harriet's death—was lugged all the way from the family's Kansas home to some place in the foothills of northern California. Faded from view as well as from memory, the portrait of four women and two men reveals some details of the clothing, but only the barest of outlines of facial features.

What I was hoping for was that our photo manipulation program would help clear up the scan, at least enough to make out the facial details. Unfortunately, though the program in past versions would do that, it no longer includes that easy fix. With thanks to my daughter for her best effort, we can catch a glimpse of what these folks once looked like, but only the faintest glimpse.

For what it's worth, I'll post it here anyhow. The photo manipulation did bring out some interesting details no longer visible in the original. If nothing else, it's a visceral reminder of how easily our memories can fade from view—sometimes, even with our constant effort to revive and restore those life moments we've tried to capture for future generations. 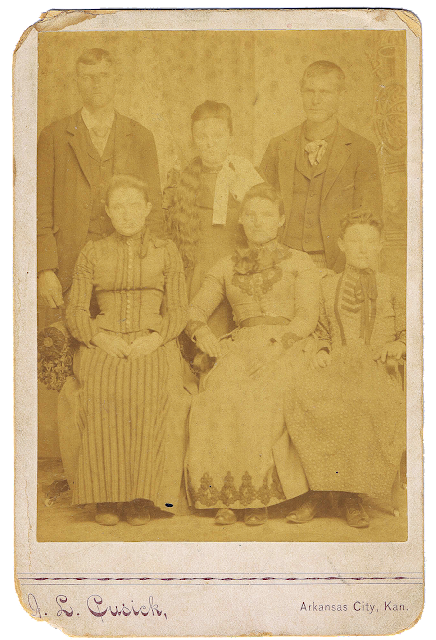 Above: Undated photograph from the studio of J. L. Cusick in Arkansas City, Kansas, with a handwritten label on the reverse: "Clara Tousley, girl standing between two cousins." Photograph currently in the possession of the author.