Could Helen Be the Link?


One by one, I've been going through the family of Forrest and Clara Barnes, trying to figure out just how five of their family's photographs made it from their home in Kansas to the foothills of northern California. So far, I've uncovered not one clue. And I'm running out of possibilities, arriving today at the youngest of the Barnes sisters.

Alta Barnes' youngest sister, Helen, was different, however. Though some of the Barnes girls had married in their teens—Alta was sixteen when she and Webster Wayne Williams were married—Helen had other plans. By the time of the 1940 census, she was out of the Barnes home, living in Kansas City, where she was finishing nursing school. Between the time of the census in April and the following August, she had found her way from Saint Joseph's School of Nursing to Alexandria, Virginia, where she found employment as a private duty nurse.

By the end of August, 1940, Helen had become Mrs. Oda Nichols. How long—if at all—she continued applying her nursing skills in a work setting in the Washington, D.C., area, or how long she remained a resident in Virginia, I can't tell. At some point, though, she returned to the midwest, settling by 1971 in Muskogee, Oklahoma.

Sometime, in all that transition, Helen Nichols became Helen N. Burchell. The only way I know that is from that stack of digitized newspapers made freely available online through the Arkansas City Public Library, a resource for which I've become extremely grateful. On account of that searchable collection, I found Helen N. Burchell's obituary, published in The Arkansas City Traveler on Tuesday, September 6, 1983. She had died the preceding Saturday in Muskogee.

Then, of course, I had found the headstone marking her resting place, back in the same cemetery in Arkansas City, Kansas, where so many others in the Barnes family had been buried. That stone, by the way, was the one she shared with the memorial to her brother Jim, the one who had donated his body to science.

Still, I find no indication that Helen had moved any farther west than the region around Kansas and Oklahoma. That leaves me with no explanation of how those five family photographs would have shown up in northern California. Usually, when restoring such orphaned photographs with current family members, I can discern a path from the family's origins to, say, the Bay area; from there, it's only the minutiae of how antique dealers go about their business that determines where a photo may land.

In this case, though the photographs remained intact in one collection in Jackson, California, there is no member of the entire Barnes' immediate family who had children or grandchildren who moved to California—not, at least, that I can find.

More important than solving that minor mystery, though, is being able to find a living descendant who would be interested in welcoming these pictures back into the family. That is what I am hoping for the most.

With one picture in the collection still waiting to be shared, we'll have just one more day to ponder what our next step will be. 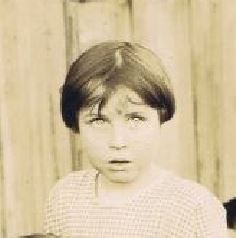 Above: Helen Naomi Barnes, cropped from a family grouping taken circa 1922 in Silverdale, Kansas; photograph currently in possession of the author.
© Copyright 2011 – 2022 by Jacqi Stevens at 2:46:00 AM
Email ThisBlogThis!Share to TwitterShare to FacebookShare to Pinterest
Labels: Barnes, California, Family Photos, Kansas, Newspaper Clippings, Occupations