When John Blain showed up in the 1880 census in Walnut, Kansas—just where his 1880s-style photograph led me to find him—he was still a teenager living with his parents. There in the home of William T. and Martha Wortham Blain, John appeared as the eldest of their six children.

One fact stood out to me in this household: everyone in the family, down to three year old Nettie Blain, had not been born in Kansas, but in Kentucky.

I decided to try my hand at finding the Blain family in the 1870 census, to see where they might have originated in Kentucky. I already figured that nine year old Rufus, seven year old Effie and their youngest sister Nettie would not be part of that earlier Kentucky household, but knew it wouldn't be hard to locate the three older children with their parents in the 1870 enumeration.

Sure enough, it looks like the Blains' hometown was a place equally as tiny as their new home in Kansas: a town of about three hundred residents called Livermore in McLean County, Kentucky.

Sometime between the birth of their then-youngest daughter Nettie around 1877 and the 1880 census, the Blains left their Kentucky farm and migrated the five hundred miles across the state of Missouri to reach the eastern edge of Kansas and their new home. From that point on, it appeared William and Martha Blain's family stayed in Walnut; they appeared in the 1885 state census and the 1900 federal census.

Considering William was born around 1832, and his wife in 1839, you would not find it surprising to learn that their names eventually dropped off the census rolls after the turn of the century. Indeed, Martha predeceased her husband in 1904 at the age of sixty four. William followed in 1915, and the couple were both buried in that Kansas town of Walnut where they had settled.

When their son John emerged from that fifteen year gap in governmental records in 1900, things were quite different for him. Gone was the seventeen year old son, living in his parents' home, according to that 1880 census. Now, he was a salesman and family man of thirty seven years of age. Married and with a young daughter living at home, still in Walnut, perhaps he felt he had a good long—and hopefully successful—life ahead of him.

You already can guess that that, of course, is not what happened. Life stories naturally come with twists and turns, and John Blain's was no different, although I'll admit the future he was about to face was somewhat more unusual than most. 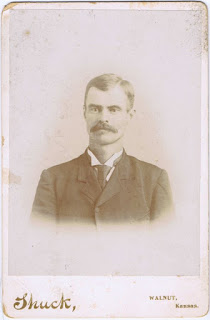 © Copyright 2011 – 2022 by Jacqi Stevens at 2:50:00 AM
Email ThisBlogThis!Share to TwitterShare to FacebookShare to Pinterest
Labels: Family Photos, Kansas, Kentucky