Meet the Man With the Moustache


An old photograph of a mystery man can offer several hints—if the viewer is able to perceive those clues and understand their meaning. Everything from the style and size of the photograph to the material of the card stock it was mounted on can help estimate when the picture was taken. Of course, the very clothes the subject was wearing—or even the style of his moustache—can date the photograph as well, as can information included in the photographer's imprint.

In the case of the photograph I found a few years ago, along with that old Christmas photo album in a northern California antique store, most of the details were simple. Because the mounting measured about four and a quarter by six and a half inches, I knew I was looking at a cabinet card, rather than the earlier—and much smaller—presentation style known as the carte de visite. That helped me zero in on a time frame beginning around 1865, and more likely around the late 1870s and 1880s.

That, however, is too wide a time frame for me. Thankfully, even the smaller details within the picture frame can narrow the date. A useful checklist in an article on dating cabinet cards mentioned that lightweight card stock, like the one in my photograph, was used from about 1866 to 1880—which also was the time frame for use of cream colored card stock. However, the article also mentioned that a matte-finished front, rather than glossy finish, was used from 1882 to 1888.

Still, that date range seems rather wide. Thankfully, there are other ways to date a photograph, as well. The subject of the photograph can provide enormous tells, when it comes to dating the picture. The style of the collar, the width of the lapels, the type of knot used on the tie—or even that moustache—are some of the many clues revealing a time frame.

While I'm not particularly handy at reviewing such details, I know there are training resources out there to help; our genealogical society recently hosted the "Genealogy Lady," Deborah Sweeney, who spoke on how to track fashion details for photographs. If I am stumped with the other possible routes to guessing the decade to focus on, I can certainly use the guidance gained from Deborah's workshop.

Knowing all those resources for hints on dating photographs, what did I do? Just make an educated guess and jump in.

This may be ill-advised for those who like to proceed cautiously. After all, the man in my photograph could have ridden into town from a distance—we are talking agricultural country here—to have his picture taken. He could have lived anywhere. All we know is that the photograph was produced in a small town called Walnut in eastern Kansas. For all we know at this point, the photographer could have been itinerant, as well.

But I decided to take my chances. I made a wild guess that this man would be a resident of Walnut and would show up in the 1880 census. I did have, after all, his name: John Blain. While John is one of the most common names in the English language, I hoped that the surname might have tempered the results enough to provide a possibility. Besides, we're talking about a town with only about two hundred people in 1880.

Seventeen? That was not how the photograph made him appear. While he did look young, he certainly wasn't a teenager in that picture. Perhaps the portrait was taken much later—at least to the point at which our man could have sported his moustache for his likeness.

Still, at least we've already found our possible subject. Next, on to learn more about who this person was. 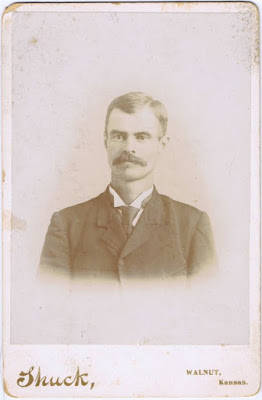 © Copyright 2011 – 2022 by Jacqi Stevens at 2:42:00 AM
Email ThisBlogThis!Share to TwitterShare to FacebookShare to Pinterest
Labels: Family Photos, Kansas