It's inevitable, when researching information on family history from past centuries, that we'll encounter terms and descriptions that seem so foreign that they are of no help at all in allowing us to better understand the world in which our ancestors lived. Face it, the world back in 1880 or even 1908 was a vastly different place than the one in which we now live. Activities of daily life became a collection of terms and tasks far different than ones we use today. Sometimes, the difference is so huge, we end up walking away without having the slightest idea about things that, to our ancestors, were so commonplace.

In researching my family's history, that's when I start asking questions.

Reading the reports on the untimely death of John Blain in Paola, Kansas, in 1908 had that same effect on me. Take, for instance, the court description of the main train track curving "round that cobhouse to the eastward." Cobhouse? I had to look that one up. (Apparently, the term either refers to a "flimsy unstable structure" or a small building "constructed of mud, clay, and straw."

Granted, I could have inferred a similar meaning from the context of the article, but I just wanted to know specifically what the term might have meant at the time it was used.

But it was another phrase that really pushed me to look it up instead of settling for an educated guess. Remember the part which mentioned that John Blain, in turning to see who was calling to him, was then "struck by the pilot beam of the engine."

I realize there are those who are so taken with the history of railroads that their enthusiasm for the subject has led them to either spend thousands of dollars on collectibles or spend countless hours consuming every last detail about the topic. I am not one of those people, so please forgive my ignorance. I had to go look up what a pilot beam might have been.

Going in search of this information was not an easy process, given my complete lack of understanding about locomotives. The handy-dandy drawing of the "Commonwealth Locomotive Pilot Beam with Flexible Buffing Gear" in the 1922 Locomotive Cyclopedia of American Practice, for instance, told me nothing. There was no scale to the drawing, nor any diagram with a red arrow and the directions, "insert pilot beam here."

I need that kind of guidance when attempting to understand my ancestors' world.

Nor did the entry I was directed to in the 1906 Locomotive Dictionary, despite its being billed as "An Illustrated Vocabulary of Terms which Designate American Railroad Locomotives." When I googled the term "pilot beam," I was directed to the page fourteen definition for "bumper beam." As a subheading to that term, the dictionary described pilot beams as "the term applied to the same part [bumper beam] when the locomotive is fitted with a pilot."

Eventually, on page fifty nine, I found an explanation which made a bit more sense—but only after wading through more verbiage. Here's how the book defined "pilot":


An inclined pointed structure of wood or iron bars fastened to the front bumper of a locomotive to remove obstructions from the track.


Oh. And then the dictionary provided the part that translated to our era:


Formerly called cow catcher? I've never heard of a pilot on a locomotive, but at least I've heard of a cow catcher. So the pilot beam must be something which affixed to the cow catcher. Great. So now I can disabuse myself of any visuals of the man being gored to death by a literal beam somehow protruding from the front of a locomotive like a gladiator's spear.

Taking the time to ascertain the exactness of terms we're not currently familiar with can help paint a clearer picture of the specific episodes in our ancestors' lives. While a 1908 term like pilot beam might not be that outdated, the terms of centuries past sometimes yield us curves which we're not sure how to field. Learning how to talk the lingo of our ancestors' contemporaries can sometimes open our eyes to the impact of those everyday realities in the lives of the people we are researching. 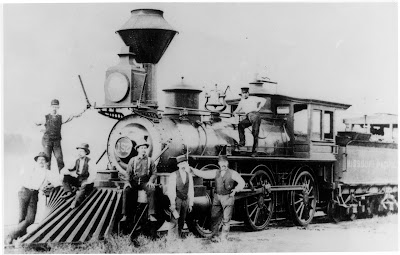 Above: Undated photograph of the Missouri Pacific Railway locomotive engine number 152; image number RG005_77_27_0714 courtesy the Missouri State Archives via Wikipedia; in the public domain—with a mighty fine specimen of a pilot included, if I say so myself.


© Copyright 2011 – 2022 by Jacqi Stevens at 2:54:00 AM
Email ThisBlogThis!Share to TwitterShare to FacebookShare to Pinterest
Labels: Getting the Big Picture, Kansas, Missouri, Railroads